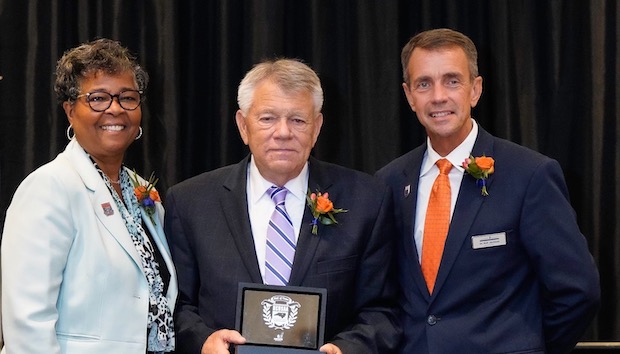 Growing up on 10th Street near the old Washington High School, Harold Robinson never thought about being part of any Hall of Fame. As of Saturday night, he’s part of five.

He coached football and baseball while holding down the athletic director’s job at Williamston (now Riverside) High School from 1974-2003 after getting started at Smithfield-Selma.

“It was a night I will never forget and it feels great to be among such accomplished coaches, players and administrators,” Robinson said.

“Everything about it was first-class and I’m grateful for the tremendous honor.”

Robinson went 239-89 at the helm of the Williamston Pirates, with 1A state titles in 1995 over Swain County and capped a 15-0 1999 season with a win over Graham, along with four other trips to the championship game. His teams also claimed seven conference crowns.

He was also the school’s athletic director in charge of 17 sports and served as an assistant principal from 1995-2003.

Robinson grew up playing all sports, but injuries slowed his progress in high school.

After a healthy and productive post-graduate year at Randolph-Macon Academy, where he played football, basketball and baseball, Robinson enrolled at ECU and tried out for the football team, but medical issues got in the way again.

“I developed epilepsy when I was 12 and had seizures every once in a while,” he said. “Coach (Max) McGee was worried that I would have one at the wrong time, so I ended up coaching the freshman linebackers and wideouts and was in charge of equipment. That’s how I starting coaching.”

Robinson’s career came full circle as he re-joined the Pirates staff under John Thompson and stayed on under Skip Holtz and Ruffin McNeil as the Director of High School Relations in charge of on-campus recruiting.

One of those recruits was quarterback Rob Kass, who now owns and operates Southern Recognition Inc., who makes the rings for the NCHSAA inductees.

“Who would have thought that one of the guys I helped come to ECU would present me with my Hall of Fame ring?”, Robinson said. “It was the capper to a tremendous evening.”

He is the third Washington native to be inducted after boyhood hero and coaching mentor J.G. “Choppy” Wagner and legendary Pam Pack basketball coach Dave Smith.