Back in the family-Rogers leads WHS volleyball 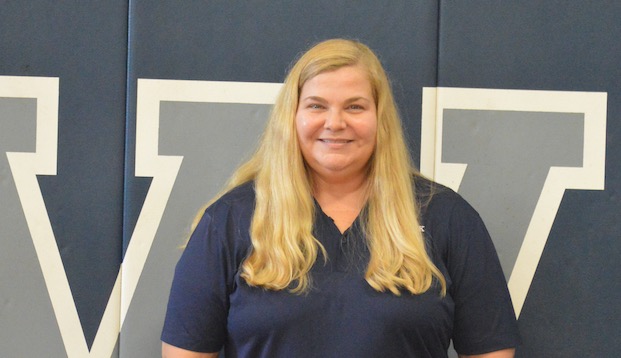 When Kim Rogers helped her mom, Rebecca, at Washington High School volleyball practices, her 10-year old self never thought about standing in her shoes. Nor did she a few years later when she played for her mother. Yet, some 30 years later, here she is, with notebook, whistle and an enthusiastic attitude that has rubbed off on her players, some of whom are listening to their third coach.

With Malt’s retirement and the addition of a new full-time trainer, Rogers has moved inside to continue the family tradition.

“I got here early before our first summer workout and the gym was cool, dark and quiet,” Rogers said. “My sophomore year was the first year the school was at this location and I closed my eyes and thought of my teammates and about playing for my mom. It smells the same, the bleachers are the same and I just felt totally at home. I’ve been in the gym plenty of times over the years, but it felt different walking in as the new volleyball coach. I want my girls to have the same great experience I did and we are off to a good start.”

The Pack is 2-1 with victories over Edenton Holmes and Bear Grass after an opening five set loss to Northside. Recent success has been hard to come by as WHS won six games last year, which matched the total victories in the previous two seasons.

Rogers coached and taught at New Bern HS and Wilmington Hoggard before coming home. Her mother started the program in the late ‘80s, stayed on through the early 2000’s and has started to help at practices again, so running an organized program is nothing new.

“I gave each player a notebook on the first day detailing new plays and other program expectations,” Rogers said. “They reacted with what I call receptive confusion, but they’ve begun to trust me and the process because they can see improvement. We are still getting to know each other, but the Northside game was our wake-up call. They exposed and exploited our weaknesses and we adjusted quickly in the next two matches.”

“They are good athletes and very coachable,” Rogers said. “Our first workout was two hours total. Soon after, we were going four and a half because the JV and varsity girls wanted more time on the floor. That told me a lot.”

After a high school career that included volleyball, swimming and softball, Rogers earned her Bachelor of Science Education degree from North Carolina State and her Master’s from East Carolina.

“Washington High School made me who I am and I want these girls to remember their time here fondly,” Rogers said. “Some of the best lifelong relationships form on teams and I want them to be proud of what they accomplished while they were here.”