Right call leads to the Hall of Fame 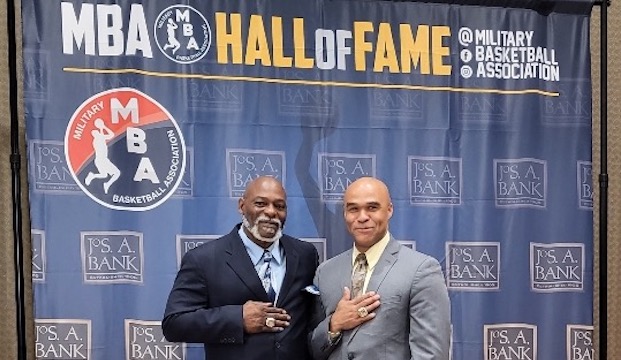 Kenneth Gray was at a crossroads. The 22-year old former Washington High School basketball standout could either go back to Oklahoma Baptist University to finish his degree as a graduate assistant coach after his eligibility was up or join the Navy.

As the fall of 1981 and a return to Shawnee, OK rapidly approached, Gray knew he had to do something. His good friend William Ebron had enlisted and had pictures and stories from exotic places he had been.

Gray was convinced and ended up in the Military Basketball Association Hall of Fame 40 years later.

If the ball had bounced a different way just a couple of times, Gray would have been part of consecutive state championship teams with the Pam Pack.

However, WHS lost, 53-51 to West Brunswick in the 1975 3A title game and fell to Graham, 65-63 in overtime Gray’s senior year under legendary coach Dave Smith. He was the 5’7 point guard on a team that included Tony Ward, Kenny Rogers, Albert Spencer, Mark Gray and Kenny’s younger brother Alvis, who would go on to star at Wake Forest.

“I loved the game and Coach Smith taught me how to play it,” Gray said. “He got me a scholarship to Arizona Western Junior College, which led to Oklahoma Baptist. He put the fire in me to work hard and I never lost that spark. I carried him on my shoulder all the time I was playing and I still hear him today when I’m coaching.”

Gray shipped out to the USS Mars, based in Alameda, Ca. in the San Francisco Bay area. Every ship and base up and down the West Coast had a basketball team and Gray quickly made his presence known. The aviation logistics specialist made the base team as the starting point guard and spent his after-hours time playing the sport he loved.

“I was All-State (in HS), but so was everybody else,” Gray said. “We had lots of former college players and a couple of pros. Our league was extremely competitive and I got a lot better quickly.”

One day, the coach of the All-Navy team saw him play and invited him to try out. 50 or 60 players from bases and ships around the country were vying for 12 spots to play against the other branches of the Armed Forces, college teams and overseas competition.

Gray made the cut and was part of the Navy squad from 1983-91 and spent four of those years on the All-Armed Forces team that traveled extensively to compete.

Gray retired to Pensacola, Fl. as a Chief Petty Officer after 25 years along with his wife, Terri, also a Washington native and four children. Both have family in Beaufort County and return several times a year.

“It’s ironic to me that I’m back at Washington High School with the same colors,” Gray said with a laugh. “I’ve had a great time playing and coaching the best sport there is. I love the Navy and would still be in if they let me.”

He received an email that he was to be inducted into the MBA Hall of Fame in July in Colorado Springs, CO.

“It means a great deal to be among the best military basketball players,” he said. “I still use the training plan that Coach Smith gave us with my teams now. I credit my success to him and his encouragement.”