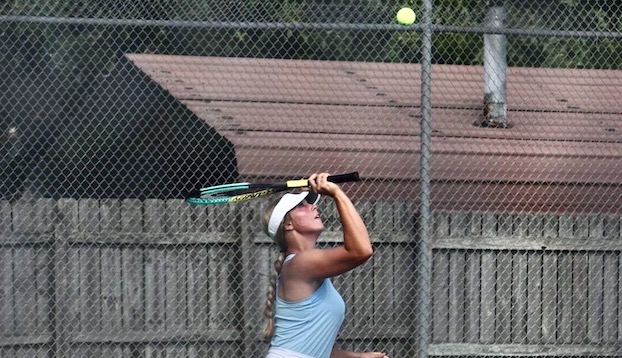 The Raiders have matches at Northeast Academy and Ridgecroft School this week.

Freshman Austin Gibbs replaced him after scoring three touchdowns the night before in the JV 42-16 victory over Faith Christian. The 5’7” freshman brought a new mojo to the Raiders offense, throwing two long touchdown strikes to Conner Sweet to end the first half. Gibbs would continue to lead the offense in the second, throwing a third touchdown to Sweet before taking one in himself to end the Raiders scoring. Pungo would fall 61 – 26, but the play of the freshman certainly gave the Raiders a positive outlook on what is to come. Gibbs finished with 237 yards through the air with 3 scores and 67 yards on the ground with a TD. Conner Sweet had five receptions for 187 yards and three TDs. The Raiders will host Mattamuskeet Friday at 4:00.

Senior hitter Reagan Stoop is out with a sprained ankle and the Raiders felt her absence in both matches as Pungo lacked a dominant presence at the net. PCA fought hard in both matches but came up short twice, dropping their record to 7 – 3. The Raiders take on Arendell Parrott Academy, Epiphany School and Kerr Vance Academy this week.

Cross County:  The Raiders boys and girls Cross Country teams traveled to Albemarle School for their first TIC meet of the season. Luke Rouse and Ginny Grace Pugh led the way for both teams again, with both runners recording top 5 finishes. The Raiders will host the TIC Meet next week.

The Raiders bounced back with a 5-2 home victory over Oakwood School Thursday. Davis Lee notched his second hat trick of the season, tallying four goals on the day. The Raiders are 2-2 and face Columbia School and Washington Montessori this week.