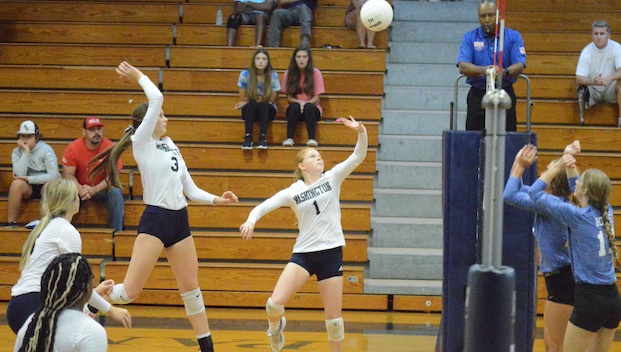 The Panthers received a wake-up call, the Pam Pack is much-improved, while the Seahawks rebuild on the volleyball court, while Southside and Washington continued their strong starts on the soccer pitch this week.

Volleyball: Northside has reeled off four straight victories after the three set loss at Pungo Christian Academy to start the season. After a 3-2 win at Washington, the Panthers have swept Unity Christian, Washington Montessori and the Pam Pack to go 4-1.

“The Pungo loss was our wake-up call,” Northside coach Michelle Leathers said. “It was our first match, but we’ve picked it up since then and are starting to figure it out.”

Northside is still looking for a setter to replace two-time All-Conference leader Paige Sawyer and a hitter to step in for 6”3 Shyanne Buck.

“Jean Grace DeHoog has done a nice job blocking and hitting,” Leathers said. “She’s worked her way into that role and we have a couple of setters who are still learning. It’s the most important position on the floor because the setter starts the offense. We’ve improved a lot over a couple of weeks.”

Speaking of improving, Washington is already close to matching the six victories of last season.

The Pam Pack is 4-2 after a 3-0 sweep at West Craven Thursday. Both losses are to Northside with two victories over Bear Grass and one against Edenton Holmes.

Meanwhile, Southside (0-6) is in rebuilding mode under first-year coach Haley Hamilton. The losses have been to Greene Central, North Pitt and Tarboro. The Coastal Plains Conference schedule begins Tuesday against Pamlico County at home.

Soccer: The Seahawks run of success continued with a 3-2 home win over North Pitt Monday, a 6-2 victory at West Craven Wednesday and a 1-0 home decision over Ayden-Grifton Thursday. Southside has won six straight after an opening one goal loss at North Pitt.

Washington has won four straight since their opening loss for a 4-1 start. The Pam Pack blasted Northeastern of Elizabeth City, 7-0, Thursday at home after wins over New Bern, Havelock and North Lenoir. WHS travels to Greenville Tuesday to take on D.H. Conley.