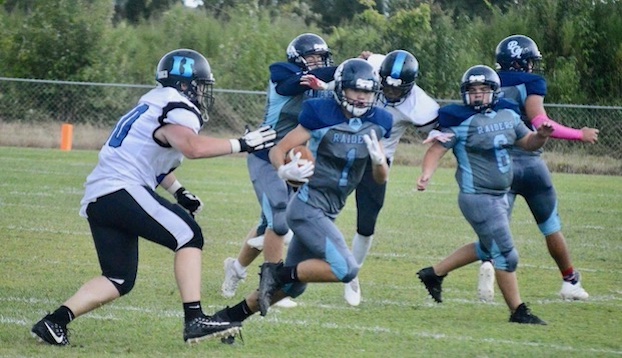 Pungo Christian Academy picked up its first win on the gridiron this year with a 38 – 18 win over Mattamuskeet Friday afternoon in Belhaven. The win also puts the Raiders coach, Alex Sefton, in the win column for the first time in his young coaching career.

Senior Conner Sweet started the Raiders scoring with a 69-yard touchdown reception from freshman Austin Gibbs. Gibbs struggled early with two first quarter turnovers but maintained his composure, throwing for three touchdowns in the game for the second consecutive week.

Junior Quay Artis scored his first touchdown in a Raider uniform, catching a 25- yard strike from Gibbs. Artis would score again with a 35-yard scamper later in the contest.

Sweet would finish with over 300 all-purpose yards in the game, with most of those yards coming via passes from Gibbs, who threw for over 200 yards for the second consecutive game and he also ran for 77 yards. Pungo will host Community Christian (0-2) on Friday in hopes to get back to .500 on the season.

PCA extended its winning streak on the pitch to three games with wins over Columbia and Washington Montessori, pushing their record to 4 – 2. The Raiders defeated the Wildcats, 5-1, on Tuesday without All-Conference goalie Jay Askew due to an illness. Bo Spencer made his first career start in goal and answered the call by allowing just one goal while making 13 saves. Senior Davis Lee netted two goals, while cousin Maddox Lee also scored twice. Brandon Tooley capped the scoring with his first goal of the season late in the second half.

On Thursday the Raiders got their first shutout win of the year, blanking Montessori 3 – 0. Askew returned in goal, saving all 14 of the Eagles shots. Davis Lee added two more goals and Bruce Taylor scored his second of the season to seal the Raiders victory. The Raiders host rival Ridgecroft School Thursday.

The Lady Raiders got back to their winning ways with victories over Epiphany School and Kerr Vance Academy while falling to Arendell Parrott Academy. The Raiders traveled to APA on Tuesday. Reagan Stoop did return from her sprained ankle, but with limited playing time. Pungo hung around in all three sets, but would eventually fall 3 – 0.

On Thursday PCA ended its three game losing streak with a 3-0 sweep of the Epiphany School Falcons. Pungo ended the week by sweeping Kerr Vance Academy of Henderson. The Raiders kick off TIC play this week with games at Northeast Academy and vs Ridgecroft School.

The girls tennis team fell to 0 – 4 on the season after suffering defeats from Ridgecroft School and Northeast Academy. The Lady Raiders came close to their first win in program history in a 5-4 loss to Northeast. Kaitlyn Williamson and Juliette Pence became the first players in program history to win a match when their number three doubles team defeated the Eagles. Williamson, along with fellow juniors Melanie Rutledge and Reese Blackman won their singles match. Pungo travels to Kerr Vance Academy and John Paul II Catholic this week.

Pungo hosted the Tar Heel Independent Conference meet Monday. Luke Rouse finished second in his best run of the season with a time of 21:21. Ginny Pugh, Kacey Keech and Emily Copes all finished in the top 10 in the girls race. Pugh finished with a career best time of 28:37.