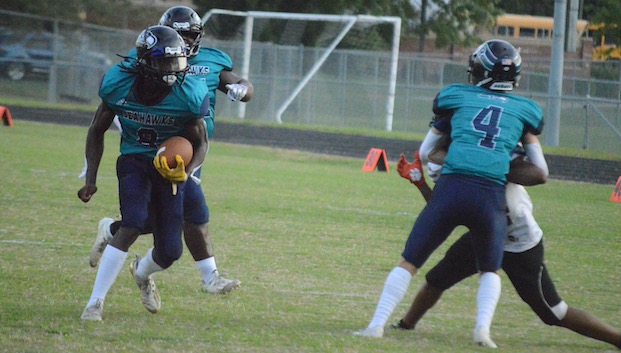 Southside senior Darren Joyner had the top performance of the week in the Seahawks home victory over South Creek. (Steve Barnes/Washington Daily News)

After Northside dropped a back and forth affair at Riverside Thursday, Southside, Washington and Pungo Christian posted home victories Friday. The Seahawks used an effective ground game against the overmatched Cougars, the Pam Pack defense made the difference against South Central and the Raiders posted big numbers in their 8-man win over Mattamuskeet.

Best of the Rest: Washington’s late defensive stops in the 12-7 win over South Central gave the offense the chances they needed to go 2-1. Gabe Davis led the way with 16 tackles, K.J. Moore had eight with a pair of sacks, Gary Payne had two sacks and Koby Munday had an interception.

Jonathan Carter led the offense with 74 yards rushing and a touchdown.

Fullback Jamie Corprew had 93 yards on 15 carries and a touchdown.

Elijah Holloway led the defense with a pair of sacks and an interception, while Landon Buck recovered a fumble and Griffin Johnson blocked an extra point. Jayvian O’Neal added 6.5 tackles.

Southside: Xavier Ham led the defense with eight tackles, including five solo while Jacob Taylor had three tackles for loss.

Pungo Christian: freshman Austin Gibbs completed 10 of 15 passes for 195 yards and two touchdowns and ran for 48 yards on 14 carries in Alex Sefton’s first win as the Raiders head coach.

Southside hosts Riverside in a battle of unbeaten teams Friday. Northside is at South Creek, while Pungo hosts Community Christian of Wilson. Washington has the week off.