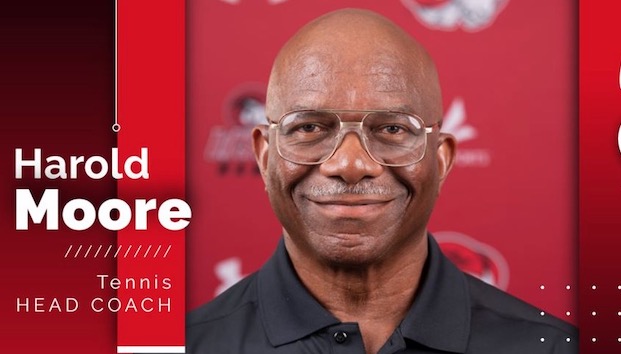 Harold Moore started with a $2.48 tennis racket his father bought at Madison Sporting Goods when he was eight years old.

Young Harold used the racket on the community courts in Washington that started his path to P.S. Jones and Washington High School, on to North Carolina Central University, then to Winston-Salem where he started his own tennis academy and to Forsythe Country Day School, where his boys teams won the state championship last spring.

“William Beason, my elementary school principal in Washington, graduated from WSSU and he used to tell us all about it,” Moore said. “I developed a passion for the school while living in the area and decided I should try coaching on another level. It should be fun and I’m ready to get started.”

Moore was part of the first integrated class to graduate from Washington High School in 1971. He and his future wife, Barbara (Godley) were classmates and both still have family in the area. Moore credits his Pam Pack teammates and a legendary basketball coach for helping him earn a scholarship to N.C. Central.

“I could have had a rough go at Washington High School, but I really didn’t because of my teammates,” Moore said. “Steve Walker, Rocky Peed, Terry Brown, Scott Howard and some others had my back, which I appreciated. I only had one issue on the court and they took care of it. Graduating at that time prepared me for situations that came up later, so I tried to take something positive from it.”

Moore met P.S. Jones and later WHS basketball coach Dave Smith on the tennis court at a young age and still uses some of the things he learned.

“Coach Smith would come over to the P.S. Jones and just play and hang out with us when I was 10 or 11,” he said. “I knew him as an adult from the community before I knew he was a coach. He loved to play with us and he was a tremendous role model. I played for him at both high schools and he never raised his voice in a negative way, but still got his point across. He taught me how to compete regardless of the competition. Those lessons translate well to the classroom and the workforce and that’s what I try to do with the kids I coach.”

Moore opened his teaching academy 27 years ago and has tutored numerous top-ranked college and high school players with an emphasis on academics. 16 of his students have become doctors since 1999.

“I use a lot of what Coach Smith taught us every day,” he said. “My students hit 25 forehand and 25 backhands in a row without missing before they do something else. We work on developing top spin and an effective slice up against the wall. I try to mold the game around the individual by working on developing each players strength first.”

A long ago conversation with Principal Beason has continued to play dividends.

“My friend and I won the doubles championship at summer camp when we were eight and he was passing out the trophies,” Moore said. “He told me that I could get a college scholarship to play tennis if I continued working hard and kept my grades up. I guess it’s worked out pretty well.”