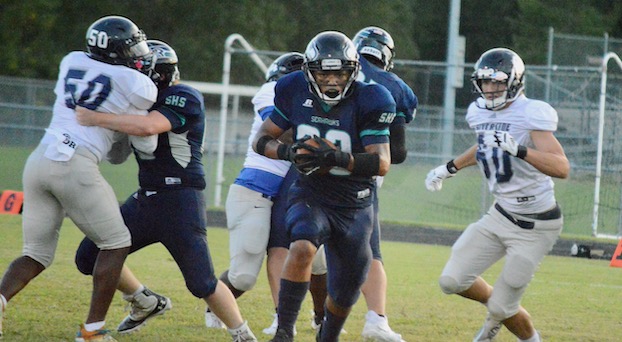 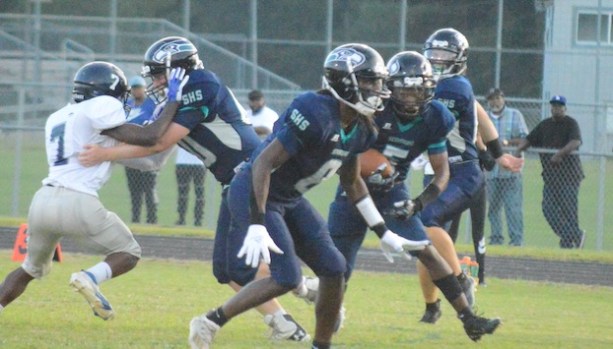 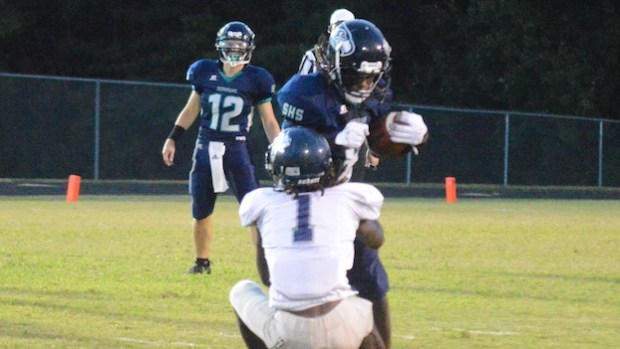 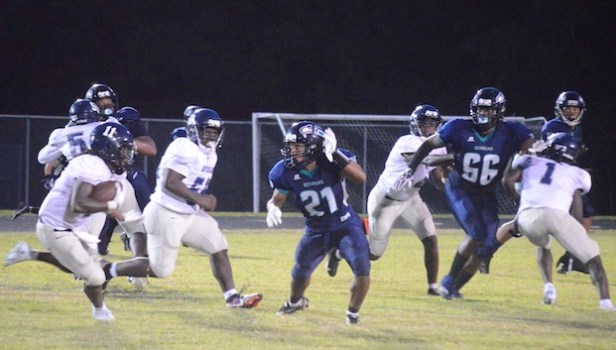 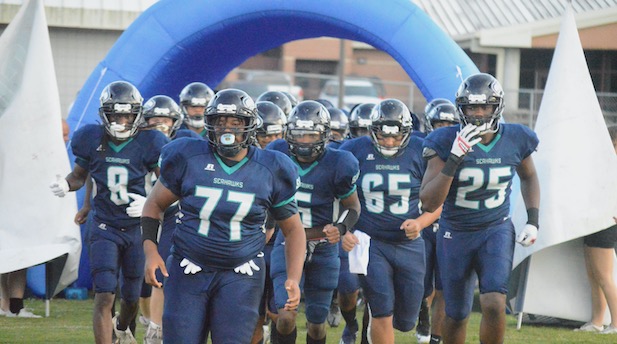 Elyjaih Baldwin (77) leads the Seahawks on the field at home against Riverside. (Steve Barnes/Washington Daily News)

Southside’s plan to remain undefeated derailed at the Riverside 40 yard line in a 23-20 home loss in a match-up of undefeated teams.

The Knights (4-0) struck first with two passes for 55 yards and a 7-0 lead on their first possession.

The Seahawks ensuing drive stopped when freshman fullback Brian Salinas fumbled at the Knights one yard line. The defense held and Southside tied the game on Darren Joyner’s two yard run to cap an 80 yard drive set up by long runs from Salinas and Tequan (Tater) Moore. The extra point was no good and Southside took a 13-7 lead into the halftime locker room.

They received the second half kickoff, but Joyner fumbled on the first play and Riverside ran it 37 yards for the tying touchdown.

The Seahawks defense forced the Knights to make a 20-yard field goal on the first play of the fourth quarter for a 16-13 advantage then took a 20-16 lead on Moore’s five yard scoring run with 5:34 to play.

Southside moved from the 26 to the Riverside 40, but turned the ball over on downs with 43 seconds left.

“Turnovers and missed tackles were the difference for us,” coach Jeff Carrow said. “We had an early chance, but turned it over, then did it again to start the second half. Riverside is one of the best teams we’ll see this year and our guys responded well. I told them they became a real team tonight and we’ll use this game to keep improving.

Salinas had a game-high 116 yards rushing, while Moore finished with 92 and caught two passes for 89.

Jacob Taylor led the defense with 5.5 tackles, including a sack and two tackles for loss.

The Panthers (2-2) led 35-0 at halftime behind a solid ground attack that rolled up over 250 yards. Marcus Clayton had 103 yards on nine carries with a touchdown, while fullback Jamie Corprew scored three times.

Pungo Christian scored 40 points in the first quarter on the way to a 68-34 8-man home victory over Community Christian of Wilson to even its record at 2-2.

Washington had the night off.