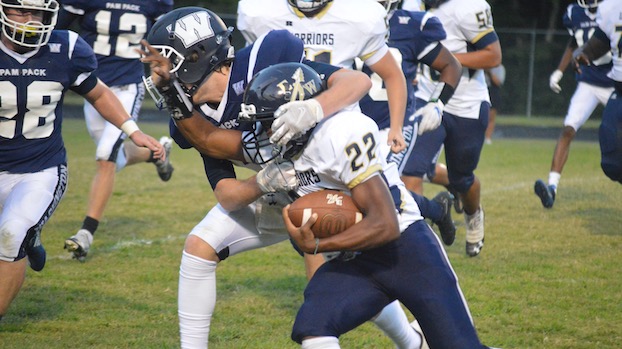 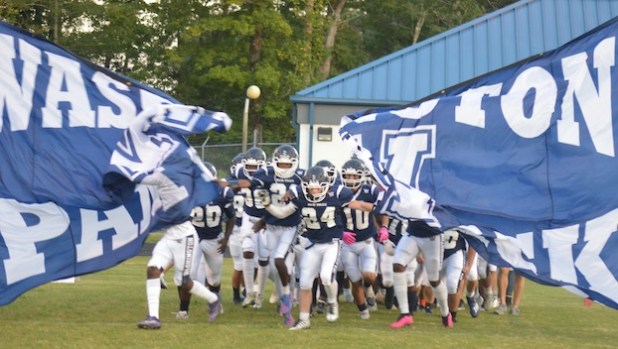 After a week off, the Pam Pack took the field against Eastern Wayne Friday. (Steve Barnes/Washington Daily News.) 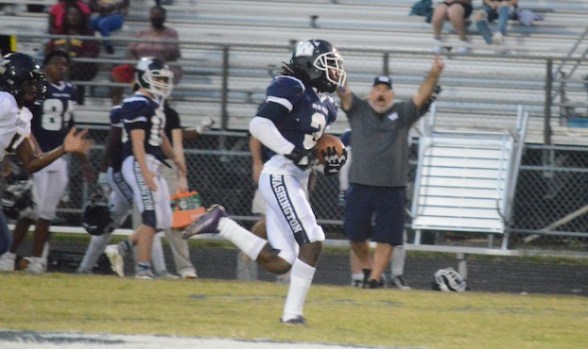 Junior tailback Josh Gordon’s long run was called back because of one of the many penalties against the Pam Pack Friday. (Steve Barnes/Washington Daily News) 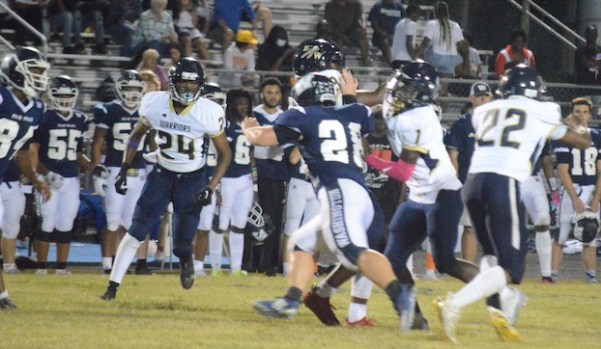 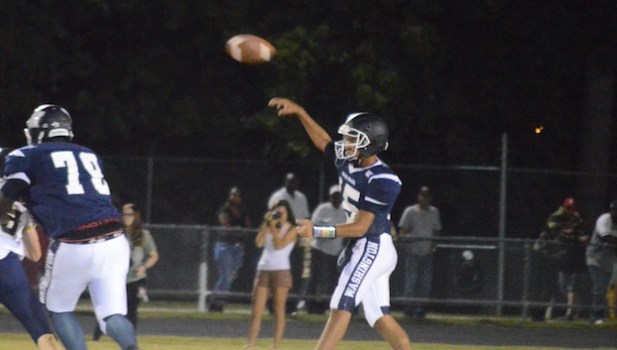 Too many penalties and inopportune turnovers cost the Washington Pam Pack dearly in a 21-6 home defeat to Eastern Wayne of Goldsboro Friday night at Wagner Stadium.

Meanwhile, up the road in Pinetown, Northside won its second straight, 34-24 over Rosewood,

Coming off a bye week, Washington was on the defensive immediately as Easter Wayne took the opening kickoff and drove to the Pam Pack one yard line before the defense held. The Warriors (2-3) got the ball back and scored on a 30-yard touchdown pass to lead 7-0 into the second quarter.

Washington’s defense held again on fourth down from the eight yard line and the offense started to click.

Josh Gordon ripped off a 32-yard run, then Gary Payne rambled for 26 more, then fumbled in the endzone on the next play.

Freshman quarterback Cam Whitley made his varsity debut on the first half’s final drive and passed the Pack to the Eastern Wayne 16-yard line before the half ended.

Whitley found Hunter Baldree for a 28-yard completion to the 13-yard line on the first drive of the third quarter and Gordon ran it in on the next play. However, the extra point was wide left for a 7-6 deficit.

Senior linebacker Dawson Mitchell intercepted a Warriors pass at the 24-yard line, but the drive stalled on fourth and goal from the seven. The field goal attempt for the lead was no good with 11:19 to play.

The Warriors broke off an 80-yard scoring run on the first play, then the Pack jumped offside on the extra point. Eastern Wayne made the two-point conversion for a 15-6 lead, then scored for the final time on a long interception return to set the final margin.

“There were no positives from this game,” said WHS coach Perry Owens. “We had four opportunities in the red zone (inside the 20) and scored once. That’s the story of this one.”

Washington is 2-2 with the Eastern Plains conference opener next week at West Craven.

Northside is 3-2 after the home win over Rosewood. Senior Marcus Clayton ran for over 200 yards and scored four touchdowns. Northside is off next week before starting conference play at East Carteret Sept. 30.

Southside and Pungo Christian had Friday off.