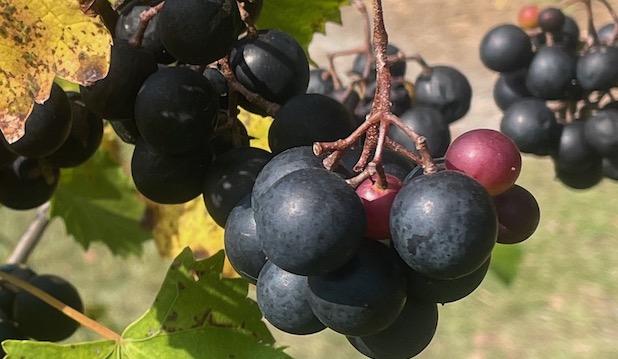 There are few rural residential properties across the Southeast that do not have a grapevine growing somewhere. Be it in an older style overhead arbor, a newer single trellis arrangement, or just growing wild. These are nearly all muscadine grapes (Vitis rotundifolia). There are two reasons for this, first, muscadines are native to the Southeastern United States. The second reason for us here in Eastern North Carolina, is Pierce’s disease (Xylella fastidiosa).

This is a disease that affects common table and wine grapes (Vitis vinifera) by causing scorch symptoms and eventual death. The instance of Pierce’s disease makes it nearly impossible to grow these grape species here. The disease is spread by insects through feeding on infected host plants and then feeding on healthy hosts. Pierce’s disease is a bacterial disease, there is no prevention or curative measures that can be taken against it.

I have had several folks that have been able to grow hybrid cultivars and Concords (Vitis labrusca) for a period of time with limited success. However, they are typically plagued with diseases such as grape anthracnose before they succumb to Pierce’s disease.

The Scuppernong is however, one of the oldest varieties of muscadine dating back to the late 1700’s in Tyrrell County! Isaac Alexander selected the white grape from the wild for cultivation. Today, there are several cultivars that do really well for residential production.

NC State University has had a great breeding program for several years at the Horticultural Crops Research Station (Castle Hayne, NC) in conjunction with the University of Georgia and the University of Arkansas. You can find varieties that are recommended for Eastern NC by visiting NCSU’s Grape portal at grapes.ces.ncsu.edu.

Muscadine grapes have a thicker skin and several seeds allowing consumption of the grapes to be a bit of an art form. I like to put the whole grape in my mouth, pop the pulp out from the skin, separate the seeds from the pulp, and spit the rest out. My children like to the same thing making it fun to eat the grapes. Some folks in my inner circle eat the skin and the pulp after spitting the seeds out. I guess it’s a little like peanuts in that folks just have their own way. There are some new cultivars with thinner skin and no seeds. A darker, red variety called, ‘RazzMatazz’ and a bronze cultivar called ‘Oh My!’.

Growing muscadines is fairly easy. They like well-drained but moist soil and do well with a pH between 6.0-6.5. However, they tolerate quite a bit of range in pH. Vines need to be located in an area that receives plenty of sunlight. There are very few pest problems associated with them. The main diseases are black rot and/or bitter rot in our area. These can be prevented/controlled with timely fungicide applications throughout the season.

The best trellis system is a single overhead wire system allowing the plant to grow two cordons, ten feet long in opposite directions from the trunk. This results in a 20 foot long vine. Side by side trellis systems work well too and provide about 30% more production but are more difficult to maintain and harvest. Overhead arbors are not recommended due to maintenance problems, mainly pruning. These systems require extensive pruning on a ladder every year that is very time consuming and physically taxing. Muscadines need to be heavily pruned every year in late winter. This causes a growth response and promotes fruiting. This is one of the main reasons why I get calls from homeowners saying they didn’t get any fruit! Muscadines and fruit in general, needs to have sunlight to produce. Vines that do not receive regular pruning have severe shading from overgrowth resulting in no fruit.

One more common issue I run into is picking female flowered cultivar. Some of our muscadine cultivars have only male or female flowers requiring pollination to produce fruit. If you are looking to plant a vine in your backyard, make sure to do your research so you know if it is female flowered or perfect flowered. Perfect flowers have both male and female flower parts that are capable of pollinating themselves. If you plant a male vine, you will not get much fruit! If you select a female vine then you must plant a male vine in order to produce fruit.

If you are interested in planting a muscadine vine in your landscape then NCSU has several resources that you should check out! These can be found through your local Cooperative Extension Center and through talking to your local horticulture agent.

Having trouble with growing in your home landscape, call the Extension office at (252)946-0111, email me at gene_fox@ncsu.edu, or ask a Master Gardener on the Blacklands Area Horticulture Facebook page. If you have a plant that you are unable to identify or would like to look at the best area for your spring garden, let’s talk! Like an old family doctor, if we can’t figure your problem out, I do house calls too!