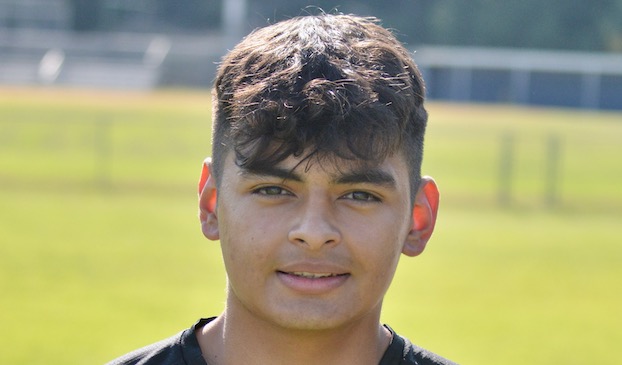 Senior Jose Ramos is a four-year player for the Southside soccer team and is a captain this season. (Steve Barnes/Washington Daily News)

Southside senior defenseman/midfielder Jose Ramos moved with his family to Chocowinity from Aiken, S.C. when he was three years old. The second-oldest of five siblings, he started playing soccer in the Washington Optimist Youth League at 10 and also kicks for the Southside football team, wrestles and is part of the track team. Coach Jay Petty describes him as an unsung player who does the little things to help the soccer team win.

Jose: Soccer, because I’ve been playing it the longest. I started running the 800 meters my sophomore year, wrestled for the first time last year and am kicking for the football team for the first time this fall. All my friends were playing soccer in the Optimist League and they encouraged me to play too. My first coach put me on defense and that’s where I’ve stayed.

Jose: I’d say communication with my teammates on the field. Coach (Jay) Petty has helped me a lot to tell my defensive teammates if they need to drop back or squeeze in to make the offensive do what we want. As a captain, it’s my responsibility to teach the younger guys where they need to be on the field, so I have to communicate more. I’m also getting better at moving the ball faster.

Jose: I started running the 800-meters to stay in shape for soccer, but it turned out that I really liked the sport itself. It’s hard to stay in shape over the summer after school is out, but track has helped. Stanley Dixon (head wrestling and assistant football coach) encouraged me to come out for both of those sports. I wrestled at 182 pounds last winter, but I’ve dropped weight and will probably go in the 170 class this year. I like the strategy in wrestling and I also like to compete. It’s fun to win and have the ref raise your hand. I’ve kicked off for the football in two games and it’s been fun so far. It’s helped me meet some new teammates.

Jose: It feels really good to score a goal as a defenseman. One was on a corner kick and I headed in the other one from in front of the goal. I was in the right place at the right time. Our offense is better in general this season. We have a lot of guys who can score and that puts more pressure on the defense.