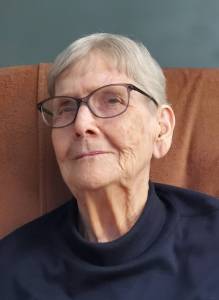 Nellie Von Jenkins Moore born November 4, 1933 to the late Paul Jenkins and Nolie Hodges Jenkins.  On April 20, 1957 she married Johnnie Martin “Snooks” Moore, who died July 25, 2008.  They were married 51 years.  She was a graduate of the class of 1952 at Grimesland High School.  After graduation she worked for Carolina Telephone Company in Greenville for nearly 15 years.

She didn’t work anymore until he was in school, then she worked some part time jobs.  She never let work interfere in her being able to be involved in his school activities, which she enjoyed.  She always enjoyed all of his friends and loved each of them.  Then the grandsons came along and she always enjoyed being a part of them growing up.  She never missed any of their activities as long as her health permitted.  She loved to see them participate in their sports, that was her biggest enjoyment and their No. 1 cheerleader.

In her recent years she has become a big TV sports fan.  She has a favorite for each sport college, NFL, NBA, and MLB.  She enjoyed her soaps, reading and word search puzzles.  She was a member of Old Ford Church of Christ.  Her survivors include her son Lee and his wife Melissa Manning-Moore who she loved as a daughter.  Her grandsons whom she loved dearly, Justin “Weasel” and Brodie Moore.  Her sister and best friend Dot Alligood.  Her nephews Doug Alligood and Tim Leggett.  Preceding her in death along with her parents and husband, a sister Peggy Jenkins Leggett and a nephew Little Paul Alligood.

She loved all her family and her neighbors, who had become as family, as they were all so good to her.

The above was written by Miss Nellie.

Funeral services will be held at 3:00 PM Thursday, September 29, 2022, at Old Ford Church of Christ, officiated by Swanson Ferguson.  Burial will be in Snowd Branch Cemetery.

The family will greet friends from 6:00 PM until 8:00 PM Wednesday, September 28, 2022, at Paul Funeral Home & Crematory and other times at the home of her son, on Clarks Neck Road, Washington.

The family would like to extend their gratitude to the staff of Ridgewood for the loving care and support given to Miss Nellie throughout her past rehabilitation and physical therapy.