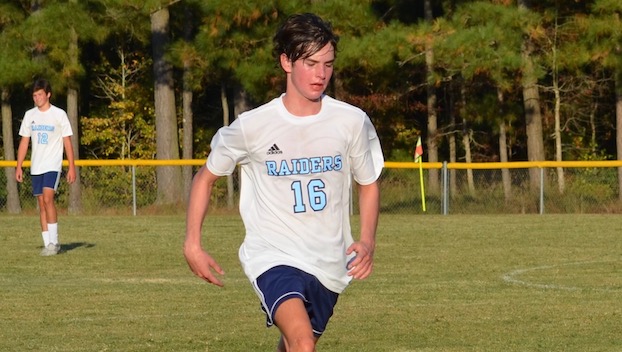 Davis Lee had a big week for Pungo Christian Academy

Davis Lee is third in the NCISAA for goals scored with 27. He needs seven more to pass Wilson Sawyer for second-most goals in a PCA single season. He currently leads the NCISAA in goals per match with 2.7. Keeper Jay Askew leads the NCISAA in saves with 110. The Raiders are 8 – 2 and play at Ridgecroft and Wilson Christian this week.

Volleyball: The Raiders are on an 11 match winning streak after wins over Terra Ceia, Albemarle and Cape Hatteras. PCA swept Terra Ceia at home 25-14, 25-13 and 25-18 Reagan Stoop had 19 kills, while Anna Stoop and Autumn Gibbs combined for 15 aces. Anna Stoop also added 26 assists.

PCA came away with a narrow 25-21, 25-21, 25-23 victory at Albemarle in the second match between last year’s state finals opponents. Reagan Stoop led the Raiders again with 21 kills as the PCA hitters had over 100 attempts, while Abbey Cutler had many back row passes.  Anna Stoop added 28 assists for Pungo.

Reagan Stoop continues to lead the NCISAA with 238 kills on the year. She is now just 21 kills away from 1,000 for her career. Anna Stoop leads the NCISAA with 409 assists and is 141 away from breaking Audrey Gibbs single season record of 550 set last season.

The Raiders are 18 – 4 (6 – 0) and can clinch their fourth consecutive TIC regular season championship with wins over Ridgecroft School and Northeast Academy this week.

Tennis: PCA fell to Lawrence Academy, the defending conference champs, in their lone contest of the week 9 – 0.  Lilly Keech lost her #2 singles 8 – 5, Reagan Spruill lost 8 – 4 in the #4 singles and the two came the closest to winning their doubles match, falling 8 – 6 in the #2 doubles spot. Pungo will travel to Ridgecroft School on Tuesday.

Cross Country: Luke Rouse led the Raiders with a time of 20:32 at Monday’s TIC meet at Northeast Academy. The sophomore has been in the top three all year and is in contention for Conference Player of the Year with just two meets to go. Ginny Pugh and Emily Copes led the girls team with top 10 finishes. The Raiders travel to Ridgecroft School next week for their final regular season match before the conference tournament on October 17 at Northeast Academy.

Football: PCA lost to Northeast Academy, 56-36, Friday at home to drop to 2-3. Senior Conner Sweet caught a pair of touchdown passes from freshman Austin Gibbs and ran for another, while junior Quay Artis scored on touchdown runs of 42 and 35 yards. The Raiders led, 16-8, but gave up three straight touchdowns, then closed to 36-30 early in the second half, before the Eagles added another scoring spurt. PCA has a bye week Friday.