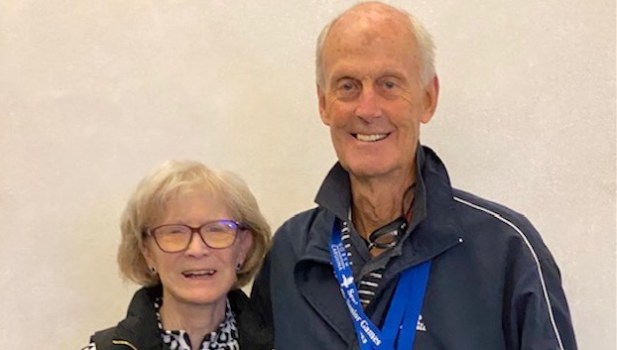 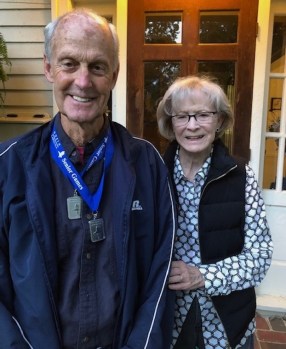 The road to recovery from cancer is always a long one. Washington Park mayor Tom Richter took another step, or perhaps a few laps, in his return by winning a pair of silver medals in swimming during the North Carolina Senior Games in Cary last week.

Ironically, it turned out that he didn’t have cancer after all, but it started a fitness-filled recovery that hasn’t slowed down.

“I had a mass in my pancreas that doctors at two different hospitals weren’t sure about until I went to Johns Hopkins in 2008,” Richter said. “Their doctor had records of hundreds of patients with symptoms just like mine and all turned out to have cancer. After six hours of surgery, I was the one who didn’t.”

Richter, who turns 80 years old in October, embarked on a fitness plan that’s ongoing and has helped him regain strength and mobility.

“I swam in college (Rockford University in Illinois) and have played tennis and golf for a long time. I’ve always been a sprinter without much interest in the distance events. Swimming is great for all-around fitness and is good for your bones and for those with arthritis. I swam in the senior games in 1999, but haven’t done much with it until recently. It’s like riding a bike. You don’t forget how to swim.”

With encouragement from his wife, Doreen, Richter signed up for this year’s event, held at the Triangle Aquatic Center in Cary. He can swim all four competitive strokes, but decided to enter the 50-yard freestyle and the 50-yard breaststroke.

He swam the first event in 40.68 seconds, about two seconds behind the winner. His 57.01 breaststroke time was .25 off the lead.

“I am a competitive person, so I was irritated that my start wasn’t better and I had a slow turn in one of them, but then I realized that I did pretty well,” he said. “It is satisfying to regain some strength and stack up pretty well against a good group of people who are interested in staying in good shape.”

Richter grew up in the Washington D.C. suburb of Garrett Park, Maryland and earned his Master’s degree in Urban and Regional Planning from New York University in 1968.

Following a two-year stint in Vietnam, he accepted a job with the Division of Community Assistance, which was part of the current N.C. Department of Commerce. His first mayoral term followed not long after.

“We took family vacations to the Outer Banks, so I was familiar with the

North Carolina coast,” Richter said. “They had a field office here in Washington and it was the best option by far. It’s worked out well.”

His runner-up finish qualified him for the National Senior Games, to be held in Pittsburgh in July. He hasn’t committed yet, but is leaning that way.

“It will take a bigger training commitment and I’ll look at the times for the other swimmers who are entered as it gets closer,” Richter said. “My recovery is ongoing and swimming (and other sports) help me hold on against the aging process. I’m thankful for the progress I’ve made and think there is more ahead. I enjoy the competition and improving my general health. If they are keeping score, I’m gonna try.”