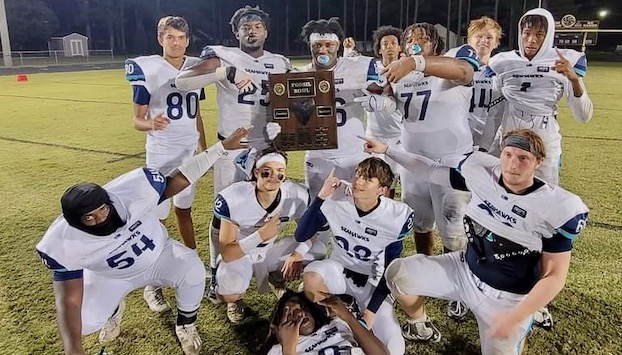 The Southside Seahawks jumped out to a 14-0 lead in Bayboro Thursday night and went on to defeat Pamlico County, 22-8 in the Coastal Plains Conference opener for both teams.

The victory also means the Seahawks keep the Fossil Bowl trophy after winning it last year for the first time since 2016.

The game against the Hurricanes (1-5) was moved to Thursday because of predicted heavy rain from Hurricane Ian on Friday.

The Seahawks (4-2) recovered a fumble on the ensuing kickoff and quarterback Walker Hill found Joyner on a 48-yard scoring pass for a quick 14-0 lead.

“I proud of the way we came right at them early,” coach Jeff Carrow said. “DJ (Joyner) was able to bust a couple big plays and we were our typical blue collar selves the entire way. It’s always good to beat a rival and keep the Fossil Bowl. We’ve had a good rivalry with them and it’s great to win two years in a row.”

The ‘Canes scored on an 86-yard run, but Joyner answered with a 12 yard scoring run and freshman fullback Brian Salinas added the two point conversion for a 22-6 halftime lead.

Southside took a safety on a mishandled snap while punting from the endzone late in the third quarter for the final margin.

Southside picked off two Pamlico passes and recovered a fumble without committing a turnover.

Joyner led the way with 145 yards rushing on 25 carries with a pair of touchdowns and added another on the 48-yard reception.

Senior defensive back Manvonte Deloach led the defense with five tackles and an interception, while Hunter Rowe also picked off a pass.

The Seahawks travel to Northside for the Anchor Bowl next Friday. Thursday’s Panthers game at East Carteret was pushed to Monday because of anticipated bad weather.

Meanwhile. Washington dropped its third straight, 45-12, at Farmville Central in Eastern Plains Conference action. The Pam Pack is 2-4 and 0-2 in the league, while the Jaguars won their fourth straight game after starting the year 0-3.

WHS trailed 22-12 at halftime as junior tailback Josh Gordon scored both touchdowns on runs of four and 28 yards, before the Jags erupted for 23 unanswered points in the second half to claim the win.

“We lost the turnover and special teams battle with three fumbles in the third quarter that led to a 21 point swing,” coach Perry Owens said. “Getting our kids to battle though adversity and not fold is the key moving forward if we want to finish .500 or better.”