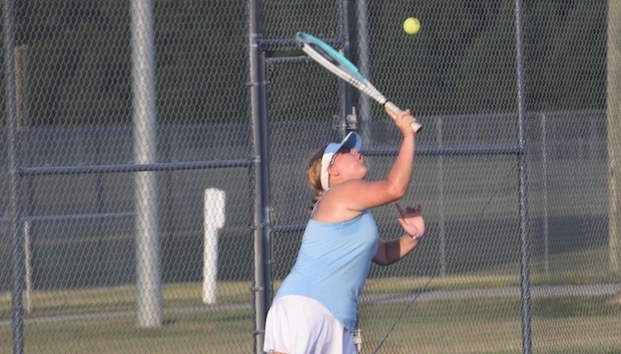 Kaitlyn Williamson competed in singles and doubles in the conference tournament for the first-year PCA program. (Submitted)

Volleyball: PCA finished the conference schedule with 3-0 victories over Terra Ceia Christian and Lawrence Academy. Reagan Stoop had 17 kills against Terra Ceia while Abbey Cutler added nine. Stoop and Autumn Gibbs combined for 14 aces in the match while Anna Stoop contributed 30 assists. Against Lawrence, Stoop finished with 19 kills and 5 aces, while Kelly Williford and Autumn Gibbs had four aces each. Anna Stoop added 24 assists. The Raiders are 22 – 4, and set a program record for regular season wins. They also finished 10 – 0 in conference play for the second time in three years, while not losing a single set in conference play. Since Reagan Stoop returned Sept. 2 from an ankle injury, the Raiders are 42 – 1 in sets played during a 15 game winning streak. The Raiders are the top seed in this week’s conference tournament at Northeast Academy and are expected to be the first seed in the NCISAA State Tournament which starts next week.

Soccer: PCA defeated Washington Montessori, 5-1, in the Raiders lone contest of the week. Davis Lee scored his seventh hat trick this fall. Brandon Tooley and Maddox Lee scored the other goals and Jay Askew had 13 saves in goal.

The Raiders hosted Cape Hatteras Monday in the final home regular season match. The teams were scoreless through the first 70 minutes of the game, but the game opened up in the final 10. The Hurricanes goalie touched the ball out of the box with under eight minutes left, resulting in Bruce Taylor’s direct kick into the net.

The Hurricanes were able to catch PCA out of position and scored a goal of their own with under four minutes left. Each team had good looks, but couldn’t convert, so the match ended in a 1-1 tie.

PCA travels to Ridgecroft School on Friday to wrap up their regular season. The Raiders are 10 – 3 – 1 and will likely be the #2 or #3 overall seed in next weeks’ NCISAA State Tournament.

Four teams play an all-day tournament where players are seeded based on their performance in conference play. Several Raiders came close to advancing to championship matches, but none prevailed. Reagan Spruill lost her semifinals singles match on a third set tie breaker while Kaitlyn Williamson and Juliette Pence also came up a point short in their doubles matchup. Melanie Rutledge made history becoming the first PCA tennis player to ever be named All-Conference.

The state tournament bracket will come out Sunday.

Football: The Raiders (2-4, 0-2) ended the home season with a 52-14 loss to Halifax Academy. The Vikings came out hot on the both sides of the ball and led 45-0 at halftime while holding PCA to negative yards rushing. Freshman quarterback Austin Gibbs left the game in an ambulance with an injury during the third quarter. He was released that evening and should be able to return this season. Ethan Mann came in at quarterback and threw touchdown passes to Quay Artis and Conner Sweet.

Mann finished five of six for 73 yards and two touchdowns. Sweet had four receptions for 58 yards while Artis had two receptions for 20 yards and a score. Mann led the Raiders defensively with 11 tackles while Holden Williams had a season high 10. The Raiders travel to Mattamuskeet on Friday at 7:00.