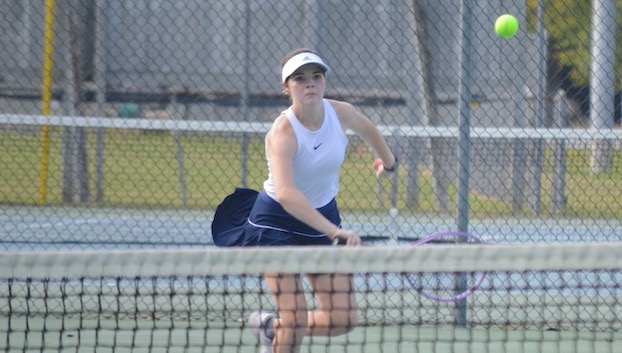 Five Washington High School tennis players will compete in the 2A East regional next week at Greene Central.

The host Rams won the team event, while the Pam Pack finished second in a repeat of the regular season standings.

Lewis defeated her Ayden-Grifton opponent, 6-1, 6-4 in the first round, swept a West Craven player, 6-0, 6-0 in the second round, before falling to top-seeded Anna Katherine Medlin of Greene Central, 6-1, 6-0 in the semi-finals

Volleyball: Northside and Pamlico County tied for the Coastal Plains 1A/2A Conference regular season title after the Panthers lost to the Hurricanes, 3-0, Thursday night in Bayboro. Both teams finished 9-1 in league play with the loss to each other and the Panthers are 17-4 overall. The conference tournament starts next week. Northside defeated Lejeune 25-14, 25-11 and 25-2 on Senior Night Tuesday.

Southside (0-18) completed the regular season with a 3-2 home loss to Jones Sr.

Washington finished third in the Eastern Plains 2A conference after 3-1 and 3-0 losses to the two teams ahead of them. The Pam Pack lost to Farmville Central at home and at Ayden-Grifton Thursday. Sandwiched between was a 25-12, 25-13, 25-12 sweep of SouthWest Edgecombe on Senior Night.

WHS finished 8-4 in the league and 12-8 overall. They host West Craven in the first round of the conference tournament Monday.

Soccer: Washington (13-4, 7-1) is second in the EPC with two weeks left in the regular season. Sophomore Will Glover scored the first goal on their new field in Wednesday’s 1-0 victory over Farmville Central. The Pack travels to league-leading Greene Central (9-0, 15-3) Monday and goes to North Pitt Wednesday.

Southside (13-4) split a pair of matches this week, winning 6-0 at Washington Montessori Monday and falling 2-0 at Lejeune Wednesday. Senior Gabe Matthews leads the Seahawks with 20 goals and 16 assists. Kenny Avila has 16 goals and 11 assists, while Jonatan Perez has 14 with seven assists. Matthews and Perez scored hat tricks Monday.

Cross Country: The girls were second and the boys were fourth behind Lejeune on Senior Day at Northside. Mason Newman (17:59) led the boys with a third place finish in the 5K race. Zane Brooks was 12th in 26:12.