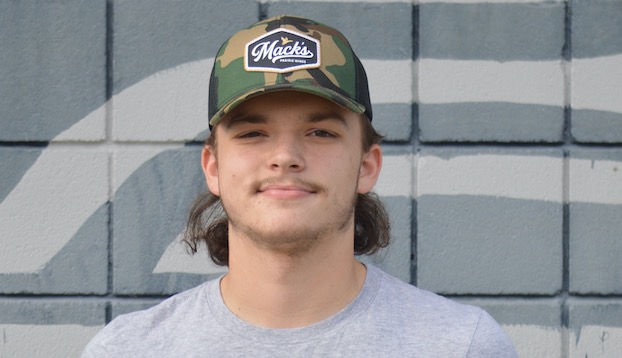 Walker Hill’s life is moving a little faster after Southside’s 10-7 victory at Northside last week to claim the Anchor Bowl trophy for the first time in four years. The senior quarterback threw the winning touchdown pass to DJ Joyner and put the ball in the air 14 times, way above the team average. With his final baseball season coming up this spring, the Chocowinity native sees good things ahead.

Walker: Finally winning it. We thought we had a good chance the last two years, but didn’t do it. The seniors set a goal to not be swept during our time here and we achieved that. It’s definitely the highlight of my life in sports and it feels great every day knowing that we won. We believed we could do it and it was fun to win it on their field. We were so pumped up and relieved that we finally beat them.

Walker: We’ve been throwing more in previous games and Coach Carrow had enough confidence in me to go for it in the second half. It was 0-0 at halftime and we were struggling running the ball. Penalties had kept us from scoring and we came out of halftime with a little chip on our shoulder. We have a lot of playmakers on offense, so we thought throwing was the best way to get the ball in their hands.

Walker: Tater beat his man on the first one and made a great catch. I was looking for him again on the touchdown, but saw they were in Cover 3 (pass defense) and saw DJ wide open over the middle. It felt good out of my hand and it (the pass) split two defenders. DJ took it from there.

I appreciate Coach Carrow’s confidence in me because a good passing game spreads the defense and makes it easier to run.

Walker: Not beating ourselves. We had way too many penalties at Northside and we have to clean that up. A win at East Carteret (Oct. 21) is huge because it would clinch the conference title. I threw a costly interception at Rosewood (one of two losses), so I have to make better reads. We have enough talent to make a deep run if we execute.

Walker: I’ve been playing since I was three and they tell me I was born with a ball in my hand. I didn’t start playing football until I was nine or 10, so baseball was my first love and I’d like to play in college. I’ve always pitched and being part of the Legion state tournament team helped my confidence because it showed me I could get college hitters out. I’m a Yankees fan and hope they win it all this year. I think it’s really cool that Aaron Judge hit 62 home runs and Derek Jeter was my favorite player growing up. I got to see him play once in Yankee Stadium and he threw me a ball.