Moore starting to make an impact in Durham 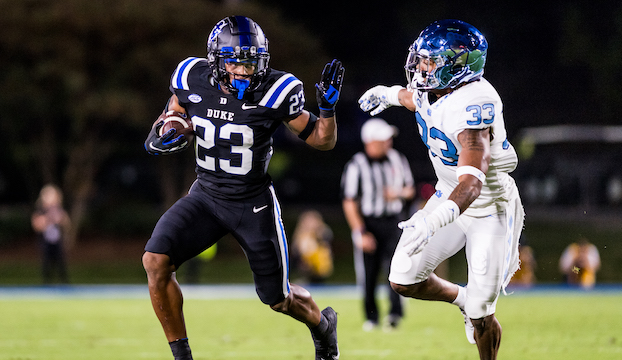 It’s a big jump from the Eastern Plains 2A Conference to the ACC, but former Washington High School star running back Terry Moore has earned more playing time for the Duke Blue Devils.

He didn’t appear in the opening victory over Temple, but made the travel squad to Northwestern the following week. After not playing that game, he also didn’t see the Wallace Wade Stadium turf in the win over North Carolina A&T.

Moore’s debut came in the Blue Devil’s loss at Kansas, but he didn’t post any stats. His first two collegiate carries came at home in the win over Virginia for a total of six yards. The upward trend continued in the overtime loss at Georgia Tech with 30 yards on five carries, including one of 11 yards and his first college pass reception for three yards.

Moore didn’t start Saturday’s home game against North Carolina, but had a 14-yard gain on the first series and a 17-yarder on the second. He finished with 42 yards on five carries, caught a pair of passes for 15 yards and made an assisted tackle on special teams in the 38-35 defeat.

“He’s taken some tremendous strides as the season has gone on,” first-year head coach Mike Elko said. “He gives us an added element back there because he’s good catching the football out of the backfield and has a different gear than some of our other guys.”

Moore graduated from WHS early, and joined the Blue Devils in January so he could take part in spring practice.

He scored a touchdown in the spring inter-squad game and was listed as a fourth team running back at the start of fall practice.

The Blue Devils former coaching staff recruited him as a defensive back after he gained just under 5,000 yards and scored over 50 touchdowns during his three year varsity career.

Elko’s staff gave him a chance to carry the ball during the spring and it’s starting to pay dividends.

“He works hard every day and I’m glad to get him going and see him have more opportunities to help us back there,” Elko said.