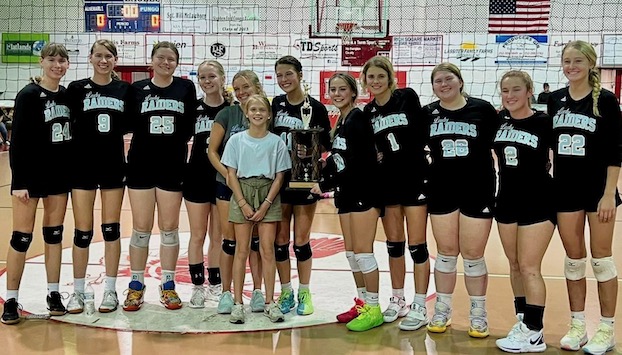 Pungo Christian Academy’s volleyball team won their sixth straight Tar Heel Independent Conference tournament title with a 3-0 victory over Albemarle School. Pungo defeated Northeast Academy in straight sets on Tuesday to get to the championship game. Reagan Stoop had 18 kills while Autumn Gibbs had 10. Anna Stoop had 5 aces to go along with 33 assists.

The Raiders won the first set 25 – 23 over Albemarle. In the second, Abbey Cutler got on a roll with her serves putting the Raiders up big on the way to a 25 – 8 win. In the third set, the Raiders fell behind 17 – 11, but rallied behind the outstanding play of Alden Taylor at the net for a 26-24 victory. Reagan Stoop added 24 kills while Cutler had 25 serves with just two errors. Anna Stoop matched her career high with 36 assists.

Reagan Stoop was named TIC Player of the Year and Tournament MVP for the fourth consecutive season. Abbey Cutler, Autumn Gibbs and Anna Stoop were all named to the All-Conference team. Cutler, Anna Stoop and Alden Taylor made the All-tournament Team. Head Coach Melanie Eddleman was named TIC Coach of the Year for the first time.

The Raiders are the top seed in the NCISAA 1A state tournament for the second year in a row. The defending champs received a double bye and will likely face #8 seed Cresset Christian Academy of Durham in Saturday’s quarterfinal matchup at 1 p.m.

Soccer: The boys soccer team finished the regular season 11 – 3 – 1 and are the #2 seed in 1A state tournament. The 11 wins are tied for most in program history, matching last year’s total. The Raiders host #7 seed Ridgecroft School Friday at 4:30 p.m., looking for its first post season win in school history. Last year, the Raiders lost a heartbreaker to Crossroads Christian in the quarterfinals in a game that went to double OT. PCA could get a rematch with Crossroads if the Raiders can make it to next week’s state championship game.

Football: Coach Alex Sefton picked up his first career shutout with a 54 – 0 win at Mattamuskeet Friday. Austin Gibbs completed 6 passes for 173 yards and two touchdowns on the night. Quay Artis had two carries for 139 yards and two scores to go along with a reception for 34 yards. Conner Sweet carried the ball 6 times for 88 yards and two scores and caught 2 passes for 105 yards and two scores. Ethan Mann led the defense with 12 tackles, 4 of those being for loss. Mann and Sweet also picked off passes. The Raiders wrap up the season Friday at Lawrence Academy.

Cross Country: Sophomore Luke Rouse was named TIC Runner of the Year for having the best times throughout the season. Rouse finished in the top three at Monday’s conference meet and earned All-Conference honors. Kacey Keech, Ginny Pugh and Emily Copes competed well for the girls team. The Raiders travel to Greensboro for next week’s state championship meet. f