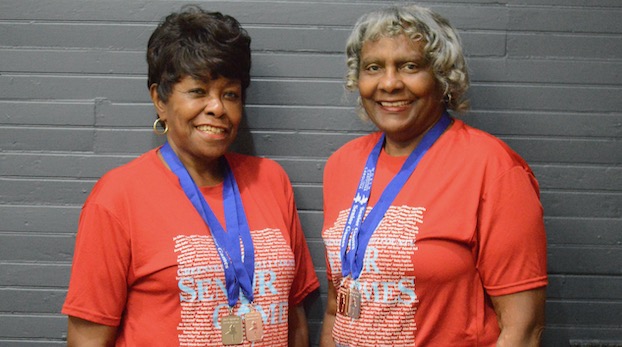 Nancy Daniels and Maudie Powell are easy to find on Thursday’s at noon. The two avid bowlers will be in the middle of aiming for strikes and trying to avoid the 7-10 split during the Fun Time Senior League at the AMF Lanes in Greenville.

While league competition continues, the duo will be tuning up for the 2023 National Senior Games coming up in Pittsburgh next summer. Daniels qualified by winning a silver medal in the 80-84 age category in singles, while Powell claimed the bronze in the 70-74 group. The two combined for another bronze in the doubles event, which puts them in elite company.

Daniels, a Washington native and Powell, who grew up in Northampton County and lives in Bath, met at the lanes after Powell moved to the area in 2009.

Both spent time in the Washington, D.C. area working for the federal government and decided to return to Eastern North Carolina to enjoy retirement.

“I took a bowling class in college and have enjoyed it since.,” Powell said. “It’s good exercise, you meet fun people and I take it as a personal challenge. It’s also about second chances; if you don’t get them all the first time, you get to try again. Sometimes your first ball goes in the gutter, then the second one knocks them all down. There’s motivation to keep trying.”

Daniels picked up the sport as an adult while living in Maryland and asked Powell to join her Thursday league in the fall after Powell settled in Bath.

They’ve been competing in the Senior Games ever since, and this is their first time qualifying for a national event, after winning the local qualifying round in singles and doubles. Daniels averaged 173 in singles this year in Raleigh, while Powell had a 164 average for a three game series.

“We went to Las Vegas in 2016 for the U.S. Women’s Open for another organization and that was a lot of fun,” Daniels said. “I’m sure Pittsburgh will be fun also.  Going to Raleigh is always a great experience and I think we did pretty well.”

Neither plans to change their routine as the national tournament gets closer.

“It’s a life-long sport that is a lot of fun and something we both really like to do,” Powell said. “We are there (at the lanes) every Thursday except on holidays and we try to do our best. The key is to stay on your mark, relax and don’t overthink it and we’re looking forward to doing that in Pittsburgh.”