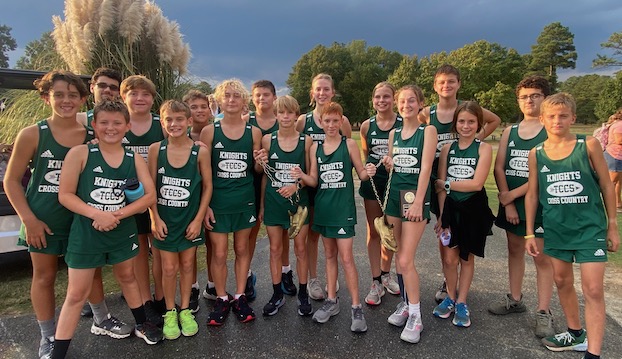 The boys followed up their regular season championship with the tournament title by eight points over Lawrence Academy with Albemarle School third and Pungo Christian fourth.

The Knights top runner, sixth-grader Troy Wright, had the fastest time at 19:43, but can’t officially compete until next year.

“All our boys ran personal best times and both teams put in the work from the first day back in the summer that it takes to win a championship,” said coach Brandi Cagle. “It’s been a blessing to coach them and they are an inspiration to me and our entire school community.”

The Knights girls edged Ridgecroft Academy by two points to win the title with Pungo third and Albemarle fourth.

Ruthie Glass was fourth overall in 25:33 and was named to the All-Conference and All-Tournament team.

Leah Harrison placed fifth in 26:39 and Lily Meijer got a personal best time of 28:16 for eighth place.

Sixth-grader Chloe Alexander ran a time of 28:05 but didn’t count in the team score.

Cagle, who started the program three years ago was named Coach of the Year.

“The kids dumped a cooler of ice water over me,” she said. “It was a ton of fun for them and cold for me, but totally worth it to see their excitement.”

The teams will compete in the NCISAA 1A state meet for the first time Friday in Pleasant Garden, NC, just south of Greensboro.

“We look forward to the state meet where we believe our boys have a chance to finish strong,” Cagle said.  “Our girls’ team is at a disadvantage because we only have three runners with no displacers. We want them to run their best race and represent our school well.  We don’t see the other schools during the year so it’s comparing apples to oranges to simply look at times. I do know our kids will push to the end to get the highest finish possible.”

Alligood, Carawan, Holland, Levi Wright and Dustin Carrow will run for the boys team, while Glass, Harrison and Meijer comprise the girls squad.