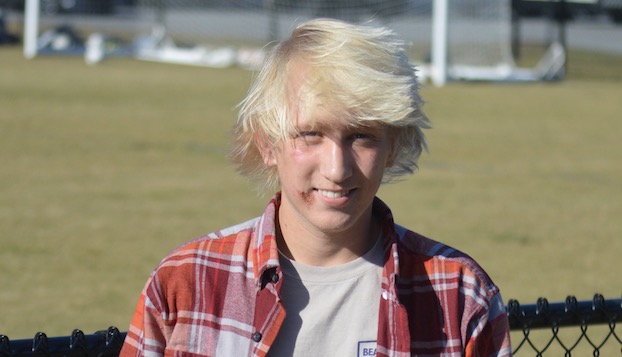 Washington High School’s Luke Brown is one of nine seniors who have been playing soccer together almost forever. He scored perhaps the biggest goal of his career Monday at Greene Central to give the Pack a share of the Eastern Plains Conference title. He is also a center fielder on the baseball team and will be part of the swim team this winter. Brown carries a 4.33 GPA and is a member of the National Honor Society.

Luke: It was very exciting and I felt really good when the shot went it. They beat us twice last year and broke our string of winning the conference (seven straight years). We were ahead at home earlier this year, but they came back, so winning Monday on their field was really big. At least we got a share of the conference title this year. (Both teams are 9-1 with two matches left).

Luke: We took possession in the midfielder and our midfielder, Marcos Miranda, looked up and saw me running toward the goal. I knew he was going to win the possession, so I just took off and he placed it perfectly. The only think in my head was I have to score this ball. I was one-on-one with the goalie, had a great look at the net and nailed it. We practice those situations every day, so I was focused. Luckily it turned out in our favor.

Luke: It takes a lot of patience, which comes with experience. I’ve played with the other seniors almost the whole time I’ve been playing soccer, so we know where each other is on the field and we have confidence in each other. As a captain, I know I have to stay composed and encouraging instead of getting frustrated. We’ve learned to stay patient and keep working to score and good things will happen.

Luke: It’s really cool to be part of history with guys I’ve played with for so long. We’ve been talking about it since we were freshmen and winning in the last minute made it even more special. We appreciate everybody who helped with the project and the timing worked out for our class.

Luke: I’m planning to attend North Carolina State and major in biology with medical school in the future. I’ve always liked science and will have my Associates Degree from Beaufort County Community College after the summer session.