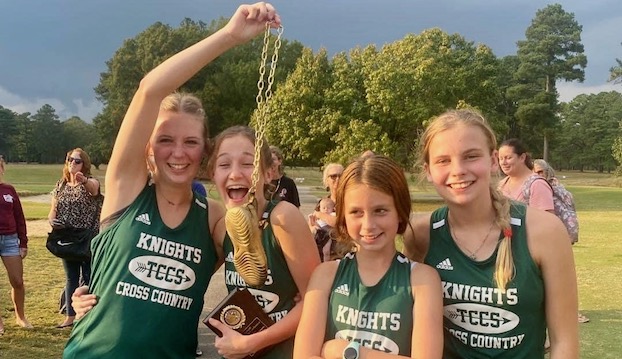 Every successful endeavor requires a plan to work hard for the long run, and the Terra Ceia Christian School cross country team is no exception. The team has won the TIC Conference Championship after multiple victories over the course of the season.

Coach Brandi Cagle and her husband and assistant coach Mark Cagle, as well as assistant coaches Sam “Sampa” Windley and Bob Girani were vital to making this goal a reality for the team.

The addition of Coach Mark Cagle came with several new practices, one of which was the golden shoe award. This consisted of bestowing a gold-painted running shoe on a chain upon a male and female runner who gave the, as coach Mark puts it, “gutsiest” performance.

The runners seem to enjoy this new concept. “I think the golden shoes are a good idea because they give runners something to look forward to at the end of the race,” says Wyatt Cutler, a seventh-grade runner and second-year veteran of the team. “It also looks really cool around your neck.”

After winning the conference finals, this award was given to the entire team as a reward for their constant efforts throughout the season. These golden shoes will be put on display as new additions to the trophy case of TCCS.

“Winning the tournament was a goal of the team since the end of last season,” Coach Brandi Cagle said. “Achieving our goal was a result of the hard work by every member of our team, top to bottom. That’s why we rewarded the entire team with the golden shoes.”

This triumph marks the first conference championship win for the Terra Ceia Knights in the field of cross country, and possibly the first of many more.

Sports Editor’s note: The article started out as an English Class assignment. The sports department is always interested in submissions from Beaufort County students. Email steve.barnes@atthewashingtondailynews.com if you are interesting in writing about high school athletics.