Lady Raiders back in the Final Four 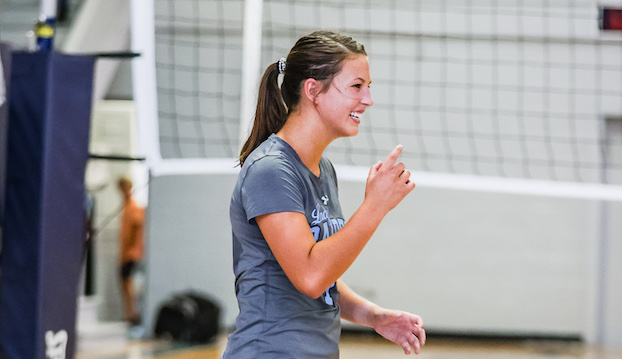 Volleyball: Pungo Volleyball advanced to its third straight NCISAA 1A Final Four with a 3 – 0 victory over Kerr Vance Academy Friday. Reagan Stoop lead the Raiders with 16 kills. Autumn Gibbs and Alden Taylor each had five aces, while Anna Stoop added 20 assists. The Raiders (24-4) hosted 5th seeded North Hills Christian of Salisbury on Tuesday at 6:00.  A win would give the Lady Raiders a chance to win their second straight state championship. It’s the first time in school history that a team accomplished that since 1994 -1995 when the Raiders softball team made back to back appearances.

Tennis: The historic first season of PCA girls tennis came to a close on Thursday with a 9 – 0 loss to Cape Fear Christian Academy. Lily Keech came closest to winning, dropping her two singles sets 6-3, 6-2. All three doubles teams lost 8 – 1. The Lady Raiders had no seniors on their roster and will bring back all seven players next season.

Soccer: PCA boys soccer postseason woes continued Friday with a 5-1 loss to conference foe Ridgecroft. The game was tied 1 – 1 at halftime thanks to a Davis Lee goal on a penalty kick with nine minutes left in the first half. But in the second, the Rams defense held the Raiders in check, limiting Pungo to just three shots on goal. The Rams were able to capitalize with four goals to advance. The loss also marks the end of a six game winning streak over the Rams dating back to last season. The Raiders finish the year 11 – 4 – 1 and will graduate just one senior, Davis Lee. On the positive side for PCA, they finish with double digit wins in back-to-back season for the first time in school history. Their ranking of #2 in NCISAA 1A is their highest finish and the Raiders should be able to maintain that ranking next season, returning 14 of 15 players Davis Lee’s total of 32 goals put him third in the state, while junior Maddox Lee was sixth with 12. Junior goal-keeper Jay Askew led 1A with 157 saves.

Football: The Raiders ended the regular season with a 60-12 loss at Lawrence Academy in Merry Hill Friday. Freshman quarterback Austin Gibbs threw touchdown passes to Conner Sweet and Quay Artis to account for the scoring. PCA (3-5) will wait for the playoff seeds to be announced Saturday.