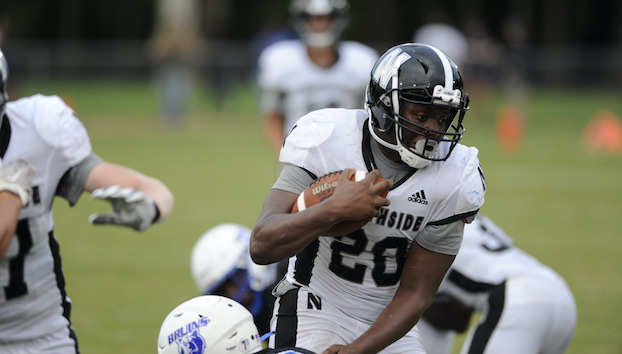 Northside was the only county school to win on a rough Friday night for the locals. The Panthers ran for 462 yards and scored all 10 touchdowns on the ground in a blowout win at LeJeune. However, the two backs most responsible didn’t start the season in those spots.

Best of the Rest: Northside: Hunter Chrismon intercepted a pass and contributed four tackles, while Landon Buck had a sack. Kicker Chase Tomaini made all nine of his extra point attempts.

Pungo Christian Academy: Freshman quarterback Austin Gibbs was 5-9 for 202 yards and a pair of touchdowns and added 43 rushing yards on six carriers in a 60-12 loss at Lawrence Academy in 8-man action. One of his scoring passes was an 84-yarder to senior Conner Sweet, who had 128 yards receiving and made five tackles on defense. Quay Artis caught the other touchdown pass and had eight tackles. Ethan Mann led the Raiders with nine tackles and Ben Russell contributed two tackles for loss.

Southside: Junior Tequan (Tater) Moore caught six passes for 97 yards, had 4.5 tackles for loss on defense and recorded a sack. Darren Joyner caught five passes for 63 yards and DeLoach had four catches for 55 yards and a touchdown. Freshman Brian Salinas scored the other touchdown.

Washington: Freshman quarterback Cameron Whitley was 10-15 for 213 yards and a pair of touchdown passes to Christian Norman in the Pam Pack’s 42-27 loss at SouthWest Edgecombe. Josh Gordan ran for 50 yards and a touchdown, while defensive back Koby Munday blocked a punt and returned in for a touchdown. Norman totaled 124 receiving yards.

This week: Southside’s home game vs. Jones Sr. has been moved to Thursday at 7 p.m. Northside hosts Pamlico County and Washington entertains Ayden-Grifton Friday. Pungo Christian’s regular season is over.