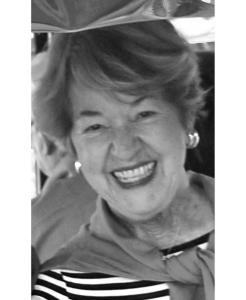 A Celebration of Life will take place on November 3 at 3pm at First Baptist Church in Washing- ton, N.C. The family will receive friends immediately following the service at the North Carolina Estuarium in Washington.

Frances was born February 18, 1934 in Galax, Va., where she grew up. She was the youngest of seven children born to Verdi Isaiah Griggs Hampton and Lillian Johnson Hampton. In Galax, she became an accomplished student and athlete. She later studied nursing at the University of Virginia. There, on the first day of his assignment to the psychiatry ward, she met the love of her life, Dr. Henry Louis Stephenson, Jr. They were married on June 30, 1956 in Galax. After 66 years, they remained married and totally devoted to one another at her passing. Theirs is one of the great love stories.

After military service and a fellowship in cardiology, Fran and Hank located in Washington, N.C., where they lived for 53 years, mostly at 710 West Main Street. There they raised their three sons.

Fran lived her life totally committed to Hank, her sons, her seven grandchildren and her two great grandchildren. Whatever their needs were, she saw to their satisfaction.

She also lived her life totally devoted to her Lord and Savior Jesus Christ. She taught Sunday school to all ages at First Baptist Church, accumulating more than 40 years of such teaching. She served as a deacon at First Baptist Church, founded a Bible Book Class which now comprises 5 classes, and was a founder of the Washington Women’s Bible Study. She also co-founded a chapter of the Fellowship of Christian Athletes for girls at Washington High School. She taught Bible studies all over eastern N.C. One of her grandchildren, upon return from spending a couple of days in Washington with “Franny,” told her mother: “Franny sure does love Jesus! And she lets us have ice cream for breakfast.”

Fran continued her athletic pursuits as a very active tennis player, becoming one of the best players in the region. Her sunny disposition covered up the fact that she really did not like to lose. She was often seen driving the family’s boat, pulling the boys and their friends on skis. She also loved dancing, socializing and talking to anybody and everybody.

Her home and her kitchen were always open to the community. 710 West Main Street was the frequent scene of church, social and civic/charitable gatherings of all types. Frequently, groups of “smelly” boys would come into her home off the horse lot or basketball court to consume ice cream and other goodies, which she joyfully served them.

To put it simply, Fran loved the Lord, her husband, her sons, her grandchildren, her great grandchildren, and literally everyone she ever met. She was particularly fond of mentoring young adult women on marriage and parenting. The Bible teaches us that “God is love.” Fran certainly was not God, but she was as full of love for her fellow man as anyone could be. She was sweet, kind and loving even in her last illness.