The day the giant camel came to town 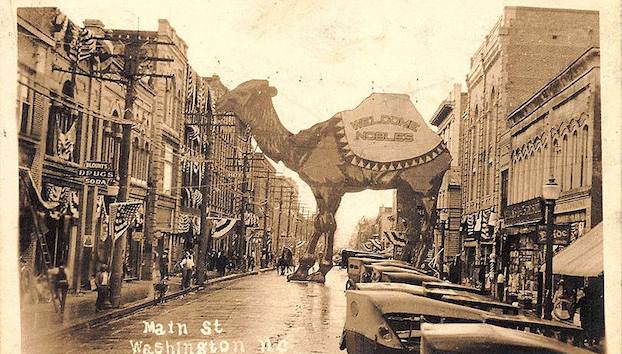 I want to begin this week’s column by thanking the WDN readers for the wonderful responses some of my columns have received I truly love writing the column and reading some of the many questions I have received from people.  Many have requested me to track down and investigate the stories they have heard growing up in the greater Washington area. A lot of these stories have been passed down as folklore and fanciful stories in many families for decades.  When I get a request to find out if the stories are true, that inspires me to learn more about Washington’s history as well as find the origin of the stories.

Some of you may have heard the decades old stories of the ‘giant birthday cake’ that was bigger than an automobile and had candles on it taller than a man. I shared that was a true story my column several months ago. A few weeks ago, I shared the story about the giant fish big as a dolphin that was found in the Pamlico River that was brought to light in an article by historian Ray Midgett.  Folks have asked about the legend of the ‘giant camel’ that was on Main Street.  Some of you may have thought the older people were making up stories about the big camel that was tied up on Main Street. They were telling you the truth.  Nearly 100 years ago, this huge camel display welcomed a group called the Nobles (Sudan Temple, Ancient Arabic Order Nobles Mystic Shrine) to town.

Well folks, the ‘giant camel on Main Street’ is true too!   During May 16th-17th 1923, 3,000 Shriners and visitors came to Washington for this huge event named the Shriner’s Spring Ceremonial.  It’s been said that President and Noble Warren Gamaliel Harding, the 29th President of the United States was invited but he declined. Some say he declined because of impending health issues, which could have possibly been the case as he died several months later August 2, 1923.

The camel, the Noble’s mascot, was secured with ropes across two buildings and was constructed from plywood. So, folks, here’s the giant camel. I wanted to thank Julian Davenport for sharing this copy of the Official Program with me.

I also wanted to give a ‘shout out’ of gratitude to Bartow and S. Mizelle. I appreciate you so much!

Pitching a tent on 15th Street