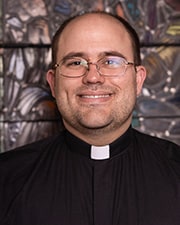 Death is a curious thing.  It’s so natural, that our bodies would eventually give up the ghost. But just because it is natural doesn’t mean it feels natural. No matter how death comes, for those left behind, it always feels like the gravest of wounds. Even when the death of a loved one comes gently after a long life, taking them in their sleep, even then do we feel robbed of something. We can mentally know something, prepare for it and accept it even, but when it finally comes, the reality of the moment crashes down upon us and we are left to grieve.

It’s the finality of death that makes it feel so harsh.  For one year, I worked as Hospital Chaplain, covering the Medical Intensive Care Unit and the Palliative Care unit. Over the course of my ministry as a chaplain, I sat by the bedside and held the hands of roughly 125 people as they died. Every time felt like something was being lost, like the world itself was being wounded by the deaths of these beloved children of God. Every. Single. Time.

I know what the traditional Christian position is on the afterlife. I know what a great many other religious traditions believe as well. Yet, in the moment, when faced with the naked finality of death, the assuredness of even our most deeply held religious convictions just isn’t enough to keep the sting of death from piercing our hearts. We are left then to wonder how to move through the world after we ourselves have been wounded by death.

It’s hard, friends. It’s so hard, and any religious leader who has ever made you feel bad for your grief failed you when you needed it the most. But, there is a way I’ve found to make a sort-of peace with death. It begins first by accepting the inevitability of our death, and the deaths of those we love. Yet, at the same time as accepting the inevitability of death, we also hold up the ideal that death does not have the final word on our lives, or even the lives of the dead. More than that, there is a way to keep their memory and influence alive even while we honestly admit that we don’t fully understand what happens beyond the grave.

I can remember the first time I stayed up the entire night and held the hand of an 80-year-old woman who was dying alone. She had no family, so I made the decision that she wasn’t going to die alone. She was unconscious, as the morphine she needed to be at rest ensured that she wasn’t awake to feel the pain. I didn’t know how best to be a chaplain to her, how to best serve her needs.  So, I gently held her hand and sang the Psalms of the Hebrew Scriptures. She made me a better pastor, a better priest, because the only two things I could offer here are in fact the best way to journey with someone as they die. I offered her my presence, and I offered her the promise that she would not be forgotten. To this day, 10 years later, she keeps making me a better priest even thought she’s been dead for so long.

This life, this one life we have, isn’t rendered meaningless by death. And there is a way to ensure eternal life for those we love, even if we don’t actually know what happens after death. By sharing stories of our loved ones, by keeping their memory alive, but remembering the wisdom they offered and the guidance they gave, we ensure that their memory, their life, extends far beyond the grave.  But not in some distant future. Rather, in the immediacy of the present, in the very moment you are reading this, let yourself be drawn back to the memory of someone who influenced you. Hold their memory at the fore of your mind, and recommit to sharing their wisdom with all those you encounter.  In that way, we ensure that death doesn’t have the final say on our lives or the lives of those we love.

Chris Adams is the Rector of St. Peter’s Episcopal Church in Washing