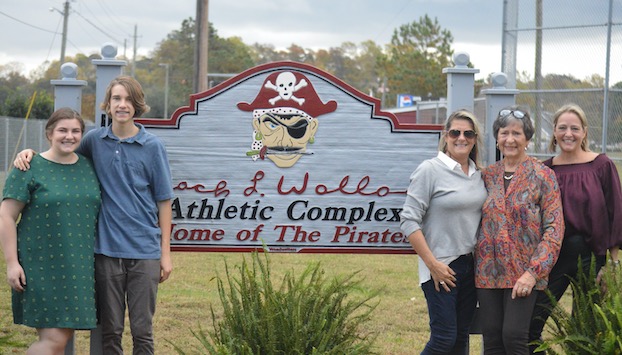 Jack Wallace prowled the sidelines of the Bath High School football field far longer than he imagined when he took a temporary teaching and coaching position at the school in the fall of 1953.

“That is his actual signature that was on everybody’s report card and diploma for almost 50 years, including mine and my sister’s,” daughter Gina Hull said. “He was such a force in this community and our family is very proud that his legacy will live on.”

Wallace died at age 91 on Nov. 2018 after serving as a teacher, coach and principal until his retirement in 1996.

He graduated from Bath High School in 1945 and attended East Carolina on a baseball scholarship. The Cubs drafted him and after a year in their minor league system, Wallace was drafted into the Korean War, where he earned a Bronze Star, a Silver Star and seven combat stars.

“Serving his country was his proudest life achievement,” current Bath Elementary principal Charles Clark said. “He was in the 3rd Infantry, whose job it was to find and disable land mines. This is a great tribute to a man who gave his heart and soul to this community.”

Wallace returned to his hometown in 1953 for what he thought would be a pit stop on the way to his next job. It turned out his future calling was right in front of him.

Wallace coached football, basketball and baseball while teaching history, then became principal in 1968.

His football teams won the last two six-man state championships in 1958 and ’59, then won the first eight-man title a year later. The Pirates reeled off 40 straight victories during that run.

“it’s just wonderful for the town to remember Jack like this,” June Wallace said. “He loved the school and the students and said if he made it back home from the war, he wanted to work with young people.”

Clark said one memory stands out to him.

“It was a few years ago during a reunion of all the classes from the 1980’s,” he recounted. “Everybody in the room stood up and clapped when Jack and June walked in. That’s not something you see every day.”