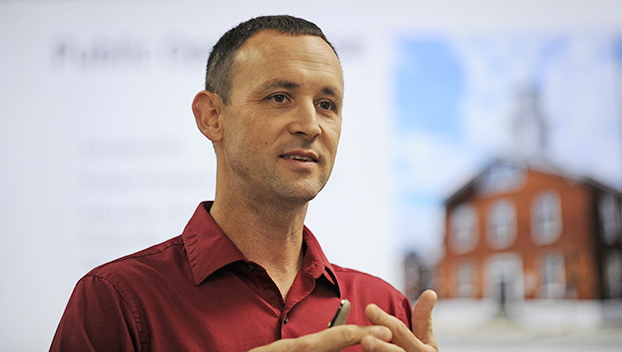 Jay McLeod, with the planning firm Stewart, addresses the crowd at a public meeting to discuss updates to the City of Washington's Comprehensive Plan and CAMA Land Use Plan. (Ashley Vansant / Washington Daily News)

Jobs, the environment, public infrastructure, flooding and housing are some of the top concerns for the future of Washington, according to a recent survey conducted to help craft the city’s next comprehensive plan.

The survey results were revealed at a public meeting Thursday night by Stewart, a Carolina-based planning firm hired to lead the city’s Comprehensive Plan and CAMA Land Use Plan updates.

Municipalities are required by North Carolina General Statute to have a current comprehensive plan with a land use map to guide future development.

The plans serve as a “vision for the community” rather than establishing rules such as zoning, according to Stewart planning manager Jay McLeod.

They will be used as a guide for elected and appointed officials and apply to the City of Washington and its extra territorial jurisdiction (ETJ), areas subject to city zoning.

McLeod said public engagement is a key part of the process in developing the plans, which will be presented for review several times before they are adopted by city officials and submitted to the state later this summer.
“This is about the vision and goals,” McLeod said. “We want to make sure those are right before we move forward.”

To collect feedback, the city launched a survey following a public kickoff meeting in August.

The public survey ran between Sept. 13 and Oct. 12 and received 622 responses from those who live and work in Washington, visit or attend school in the city. The majority of respondents were full-time residents.

The survey asked which goals from the previous plan were still relevant. Top responses included “protect the riverfront shoreline and environmental resources” and “promote economic development throughout the community.”

The top three reasons for living in Washington were its small town feel, its natural setting/access to the water and its downtown/town character/identity/history, according to the survey results.

The survey results were presented at Thursday’s meeting at the P.S. Jones Alumni Museum on North Pierce Street, along with various other data, including population projections.

“The state, generally speaking, doesn’t think population is going to go crazy here,” McLeod said. “And I would tend to agree. Washington has kind of been in a steady state for some time.”

Residents can still provide feedback and participate in future meetings. For more information, visit the city’s website, washingtonnc.gov, or contact Holli Tetterton at htetterton@washingtonnc.gov and 252-975-9383.