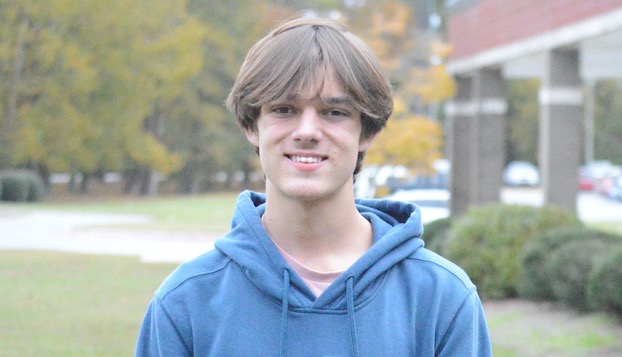 Northside sophomore Andrew Harding takes a measured, tactical approach to running cross country and it paid off with a third place finish in last weekend’s 1A state meet in Kernersville. He covered the 5K course in 17:20, 34 seconds off the winning pace. The Bath, N.C. native played baseball growing up, then followed his older brother onto the Panthers cross country team. He also runs the 800, 4 x 800 relay, the mile and two-mile events on the track team in the spring.

Andrew: Everyone’s goal is to win, but I seriously thought I had a shot. My times have steadily improved this fall and I felt like I could hang with the guys at the front of the pack. I knew my speed was good enough if I got out fast.

Andrew: There are so many runners bunched together at the start, so the first objective was to not fall down. Then, it was to not get boxed in, which did happen. I was stuck for the first half mile, but I noticed the guy who ended up finishing second was right beside me. When he made his move to the outside to break away, I went with him. Both of us caught up to the front of the pack soon after. I was planning on trying to take the lead at the two mile mark, but realized I would use up too much energy and not have enough to finish strong. I was fifth coming into the last 200 meters, but had enough left to pass two guys to finish third. That’s when I knew my training paid off.

Andrew: His support and leadership meant a lot to me and still does. He came to the state meet to cheer me on and offer advice. I could hear him shouting out my times and telling me to push it. We’ve talked for the last month figuring out a race plan and training strategy. Last year, he showed me how to train and what approach to take toward races.

Andrew: My older brother, Jordan, was on the cross country team last year and I followed him along to practice. I hadn’t done it before my freshman year, but my times were good and I was hanging close to Keanu later in the year, so I decided to stick with it. The best part is to see my times keep dropping and I enjoy the training it takes to make them keep improving.