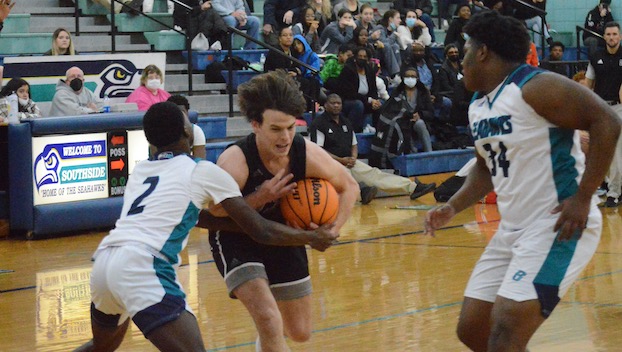 The Panthers are hoping senior Briley Cooper (middle) can rejoin the team soon after tearing his ACL at the end of last season. (Steve Barnes/Washington Daily News)

Northside boys basketball coach Jared Adams has youth in abundance this season and hopes the group will grow up quickly.

Coming off a 9-11 2021 campaign, the Panthers only have one healthy returnee, junior Griffin Johnson, heading into Tuesday’s season-opener at home against the Northeast Academy for Aerospace and Advanced Technology, a charter school from Elizabeth City.

Adams hopes senior Briley Cooper will join Johnson at some point soon. Cooper, who averaged 12.5 points and 4.5 rebounds last year, tore his ACL for the third time in late February and could be cleared early next month.

“I hope he can play for the teams’ sake and so he can salvage something from his senior year,” Adams said. “He’s a great kid who has been through a lot and I’m hopeful his knee has healed properly and he’ll be with us.”

The other 11 players are getting their first taste of varsity experience, including sophomore point guard Max Vansant.

“It will be his job to get us in the right sets to run our plays,” Adams said. “He did it last year for JV, so the biggest adjustment for all of them coming up from JV will be the faster pace of play. We had scrimmages at Pamlico and Pasquotank over the summer against several different teams and looked pretty good.”

The Panthers could have a height advantage as the young players develop. Johnson is 6’3, freshman Zi’Mier Alexander and junior Tate Gibbs are 6’4, while junior Tyler Moore is 6’6.

“We’ve rebuilt the roster and it might take a while, but these guys have plenty of potential,” Adams said. “I expect them to improve quickly once they get used to playing together.”

Adams said East Carteret, the only 2A school, in the Coastal Plains Conference is the pre-season favorite.

Schedule highlights include home games with Washington and Jacksonville along with home and way series against Pasquotank and Croatan. Home and away games against Southside highlight the league slate.