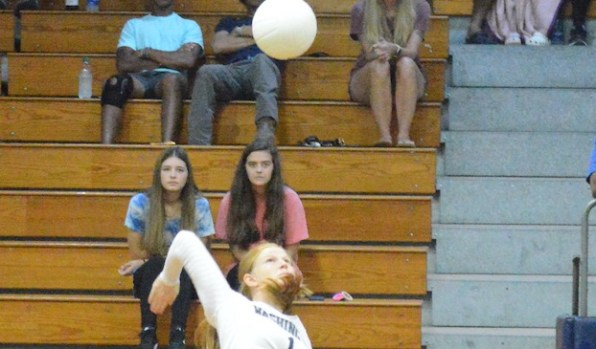 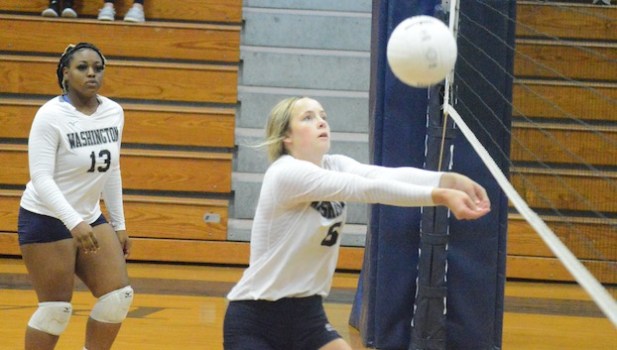 Washington High School seniors Ava Mizell and Sara Hedrick were named to the All-Eastern Plains Conference volleyball team after leading the Pack to their first winning record and playoff spot in four seasons.

Mizell led the team in assists with 591, service points (181) and digs (178) and was second in the conference in assists, fourth in blocks and sixth in digs and service aces.

“Ava is a true leader on and off the court,” coach Kim Rogers said. “She was our captain and the link between me and the team when they were on the floor. As our setter, she was great at running and executing our plays. Her organization and attention to detail was invaluable.”

Hedrick transferred to WHS this fall after her family moved from Ft. Myers, FL.

She led the team with 326 kills from her outside hitter position, had a team-best 76 blocks and was second to Mizell with 131 digs.

Among conference players, Hedrick was second in kills and blocks and seventh in digs.

“Sara came in and did a great job for us,” Rogers said. “Not only did she lead in kills and blocks, she was a reliable and consistent passer.”

The Pam Pack finished 14-10 overall and 9-4 in the league, good for third place. They defeated East Bladen in the first round of the 2A playoffs before losing to conference rival Farmville Central in the second round. Sara and Ava were a true asset to the team, and I will truly miss them next year,” Rogers said.  “For my first year coaching the Pam Pack, I couldn’t have asked for a better group of seniors.  I am so proud of them all and their accomplishments.”