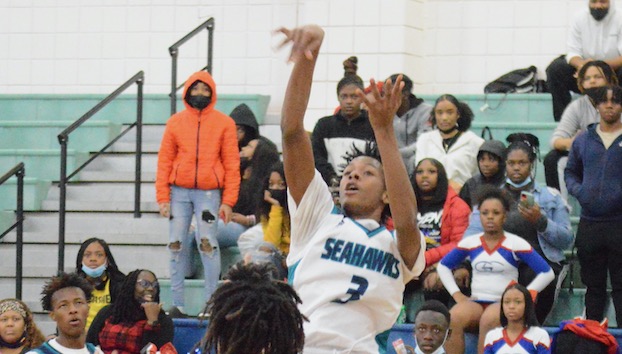 Since the football season lasted until early November and most of the football players also play basketball, the Seahawk boys didn’t have much time to prepare for Wednesday’s season opener at Mattamuskeet.

However, the learning curve should be a short one, since several experienced players return, including leading scorer Manvonte Deloach.

The 6’3 lankly senior averaged 13.5 points a game last year and coach Davelle Whitney is counting on him to increase his average, while assuming increased ball-handling and rebounding duties.

“He can do a lot of things well and we need him to,” Whitney said. “He’s more motivated since it’s his senior year and he’s looked good in practice so far. He can shoot, drive and get to the free throw line, which will make us a better team.”

Southside is coming off a 7-15, 5-5 season during which Whitney said his team lacked a defensive mindset.

“We had some speed and could shoot it a little last year, so we were content to trade baskets and hope to get steals for some easy ones,” Whitney said. “I’m planning on us committing to strong defense this season. We have some big bodies inside to rebound so we shouldn’t get pushed around and we have guards who can move their feet.”

Whitney is counting on seniors Xavier Ham and Elgin Stilley to help down low along with senior Darren (DJ) Joyner and junior Tequon (Tater) Moore to help in the backcourt.

“Tater and DJ are great athletes who will help us with steals and rebounds,” Whitney said. “They hustle and enjoy playing defense. We have different guys who are committed to having a better season than we did last year.”

The Seahawks have four of their first five games on the road at Washington County, Ayden-Grifton and South Creek after Mattamuskeet.

“I’m okay with than,” Whitney said. “They are all close trips and if we can win on the road, there’s a good chance we can at home.”