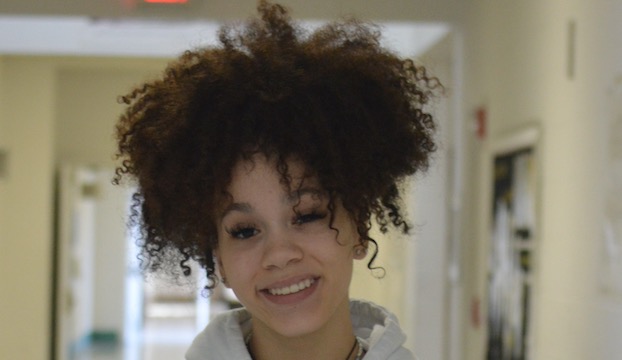 Haley Whitley was Washington’s Player of the Game with 12 points and nine rebounds in Thursday’s loss at J.H. Rose in Greenville. (Steve Barnes/Washington Daily News)

Washington High School basketball player Haley Whitley’s senior year is off to a positive start after a solid junior season. The Washington native earned team player of the game recognition after scoring 12 points and grabbing nine rebounds against J.H. Rose Thursday in Greenville. The 5’11 post player also had nine rebounds in the season-opener at First Flight.

Haley: I played some in the Washington Youth Basketball League when I was younger, then I was on the team at P.S. Jones in 7th grade and have played since then. I played a lot of softball growing up, but got hit with the ball while I was batting, so I switched to basketball.

Haley: He’s just very encouraging and positive with us all the time even when things aren’t going well during a game. I’d like to play basketball at some level in college and he’s helped me make contact with coaches and tried to get me noticed. He gives us good drills to work on in practice to help us improve.

Haley: I think it’s cool to be a captain. I’m learning to be a better leader and not get frustrated so easily when something goes against us during a game. It keeps me grounded because I know I have to think positive so my teammates will do so. Megan and I try to keep everybody in line and remind them that sportsmanship is important.

Haley: The West Craven game at home was really fun. It was close all the way, but we managed to win (62-58) and I played pretty well (16 points). The Ayden-Grifton game on senior night was really fun also, even though we lost (36-35). Hopefully, there will be more highlights this year. We are going to trying to make it as much fun as possible.

Haley: I like art and biology and reading. I also like to sketch when I’m bored. I play the piano and played the saxophone and clarinet in the middle school band.