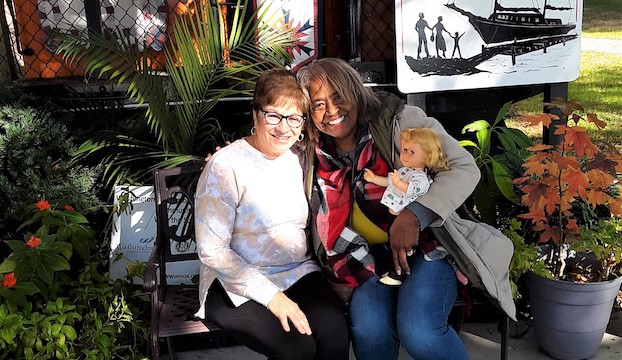 I wanted to thank the readers of my column for all the wonderful compliments I received about last week’s column about The Wish Book.  People from all over the country told me how looking at the Wish Book as children brought back so many memories to them as adults as they read the column. I believe that we are all one big community of people, and that we are more alike than we are different. Our skin colors, where we lived, the economic group we grew up in are what made our lives and personalities different, but as children, we had some of the same dreams and wishes. The Wish Book testimonials that were shared with me has proven that to be true.

When I was six, Mama read ‘Yes Virginia, There Is a Santa Claus” to my twin sister and me.  Even my big sister Libby sat close by listening.  Although she was 12 at the time and by then did not believe in Santa, she seemed pretty interested in the newspaper story.

‘Yes, Virginia There Is a Santa’ was written in September 1897 as a newspaper editorial in the New York Sun by Francis P. Church. It was in reply to eight-year-old Virginia O’Hanlon who wrote to the newspaper to ask if there really was a Santa Claus.  Even today, I still remember the part of the editorial that read “Yes Virginia, there is a Santa Claus. He exists as certainly as love, generosity and devotion exists, and you know that they abound and give to your life it’s highest beauty and joy.”

Last week I wrote about how, as a little girl, I wrote a letter to Santa two Christmas’s in a row and left it on the mantel in the living room. I put it next to a Mr. Goodbar candy bar to make sure Santa would see it. The letters specifically requested a Mattel Chatty Cathy talking doll. I never got Chatty Cathy. The candy bar was gone so I thought Santa just forgot to bring the doll.

Fast forward six decades later, not knowing another little girl living far away from me did get a Chatty Cathy doll.   But as her Chatty Cathy gave way to other toys and games and bigger kid things, her Chatty Cathy was lovingly stored in a trunk as part of her precious childhood treasures.

Last Friday, I saw my dear friend Elaine Warren walking up the steps to the Washington Waterfront Underground Railroad Museum with a gift bag with Chatty Cathy’s head sticking out of the bag. Elaine had read last week’s column and she said, she knew she wanted to give me her doll that she had received for Christmas 60 years ago. She told me how much she had loved the doll and it showed in the doll’s almost pristine condition. It would take another column to tell you about how loved and honored I felt when she gave me her doll.

Francis P. Church’s words “Santa exists as certainly as love and generosity exists, and you know that they abound and give to your life it’s highest beauty and joy” came flooding back to my memory, and I tried to keep tears from flooding my eyes.   Elaine could have saved that doll for her grandchildren or some other beloved child in her family. She could have kept it as a family heirloom. But she wanted me to have it. That’s love folks. I believe the child in us will always look for Santa. And he really does show up, sometimes 60 years later, without the familiar red suit and reindeer, disguised as a person, looking just like people, looking just like my beautiful friend Elaine Warren.