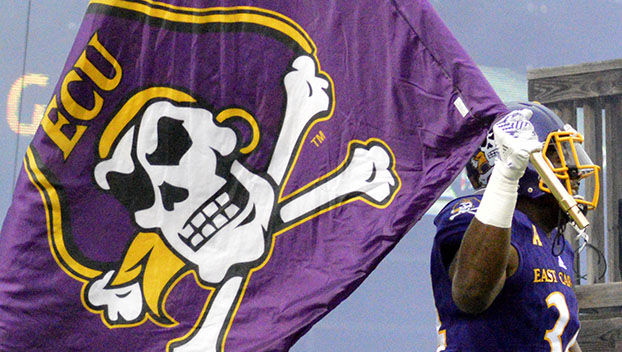 Have some eggnog, Pirate fans. It’s been a long season.

From the missed kicks in an overstuffed and overheated Dowdy-Ficklen stadium versus NC State, to the closer-than-it-should-have-been pearl-clutcher at Temple, this ECU football season was, as the saying goes, hard on a Pirate.

There were so many topsy-turvy nail biters in East Carolina’s second consecutive seven win season that overall progress can easily get overlooked. Once the final gun sounded in Philadelphia, the Pirate Nation immediately became overcome with an unhealthy case of bowl mania; constantly scrolling the web for the latest projections on where the Pirates might touch down in bowl land… and finding something wrong with all of them.

For some, clutching their phones too tightly led to what’s clinically known as FDS, or Fan Derangement Syndrome. The symptoms are mild at first (sweaty palms, bloodshot eyes,) but soon develop into a chronic and debilitating malady- manifested by the inversion of time and space, an inflated ego and ultimately, delusions of grandeur. All exacerbated by the projection of these neuralgias onto a group of college kids who happen to play football and worse, the adults who supervise them.

What else could explain the collective thumbs down on Sunday’s news that ECU is to play Coastal Carolina in The TicketSmarter Birmingham Bowl on December 27? The complaints were few and several, but they all hinged on three seemingly objective realities: the location, the opponent and the timing.

The Location: Birmingham may not be Pasadena, but then again, ECU is not exactly Rose Bowl material. If you have a complaint with the selection, consider that ECU is a mere 27 points from going 7-17 over the last two years. That should cheer you up. Once the Pirate Nation gets over the notion of a tropical bowl game played in St. Somewhere, they’ll find that Birmingham can be a fun and functional destination to get their bowl on. A downtown revitalization and more importantly, a new stadium add new excitement to The Magic City (formerly known as The Pittsburgh of the South). Legion Field, the ole Lady in Gray (featuring gray hot dogs) is still creaking along on the other side of town, but Protective Stadium, the awkward name notwithstanding, promises for a much livelier fan experience. Besides, Pirate fans should consider B-ham as their new home away from home, this marking their eighth excursion overall and third bowl trip. A bowl win this year would knot ECU’s in-town record versus all opponents to 4-4, and their first win there over any team not named UAB.

The Opponent: Coastal Carolina is just wrapping it’s seventh season at the FBS level, but while ECU was painstakingly beginning to rebuild under Mike Houston, the Chanticleers were racking up the wins. National rankings, bowl wins, averaging over ten wins a season, Pirate dreams are made of these. And while it’s true that the Chants would have had a tough time managing 31 wins over the last three years playing ECU’s schedule, their success is their own. Even with the departure of Head Coach Jamey Chadwell, who was offered forty-two million reasons to leave the Grand Strand and become the skipper at Liberty, there’s no doubt that CCU will look at their matchup against ECU as a true litmus test of their program’s development. Anything less than that approach by East Carolina will make for an embarrassing evening.

The Timing: While the Christmas Carol suggests three French hens are to be gifted on the third day of Christmas (which coincidentally is the same as bowl day on December 27th), all the Pirate Nation gets is one onery Chanticleer (which research shows to be a rooster, but we draw our comparisons where we can). At least it sounds French. According to lore, the three hens represent Faith, Hope and Love; each of which on their own merit and when taken liberally, can soothe the nerves and calm the symptoms of FDS. Taken together, and with a little Christmas Football Magic thrown in, it could just be the right recipe for a Merry Pirate Christmas.