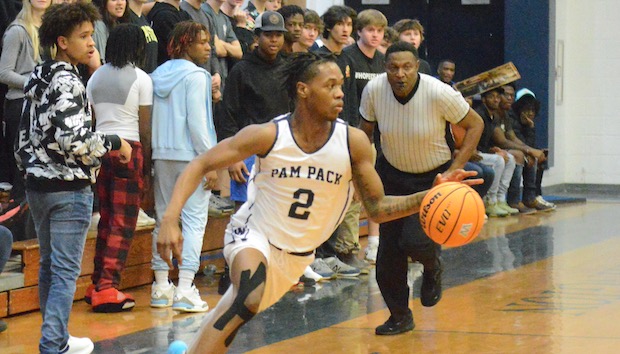 The Southside girls are off to the hottest start among county basketball teams, with the others still a work in progress.

The Seahawks, 5-0 picked up a pair of road victories this week, 57-18 Tuesday at South Creek and 59-49 at Ayden-Grifton Wednesday.

Senior Ka’Nyah O’Neal, who has a chance to score 2,000 points in her career, exploded for 37 points, 16 rebounds and eight steals Wednesday, after 12 points, 11 rebounds, eight steals and four assists in limited playing time Tuesday. Sophomore Tamaya Smith led the ‘Hawks with 14 points against South Creek.

“It’s been a long time since Ka’Nyah hasn’t been our leading scorer and that’s actually a great thing,” coach Milton Ruffin said. “She’s always had to carry the load on both ends of the floor and it’s exciting to see our younger players step up and take some of that off her. All five starters are doing something to help us win and that’s the difference for us so far.”

Freshman Chaise Smith and sophomore Jayvon Williams hit back-to-back three pointers to give the Washington boys a 12 point lead against South Central coming out of the halftime locker room, but the Bulldogs battled back for a 71-69 victory to spoil the Pam Pack’s home opener.

South Central (2-3) went on a 15-2 run to take the lead for good, but the Pack (1-3) used big baskets from Smith, senior Christian Norman and a pair of free throws from junior Jerai Davenport for a 71-69 deficit with 22 seconds left. Washington forced a turnover, then was called for traveling on the final possession.

“We had the right play called, we just didn’t execute,” coach David Allewalt said. “Despite the loss, this was our best game so far. We have a lot of talented players who are still learning to trust each other. A couple of key plays didn’t go our way tonight, but we will be hard to deal with as the guys get comfortable with each other,”

Williams scored 14 of his team-high 21 points in the first half, while Smith had 13 of his 20 in the second half.

The Northside are 4-2 after a 57-33 victory over Cape Hatteras Tuesday and a 63-31 loss to undefeated Jacksonville Wednesday. Sophomore point guard Max Vansant led the Panthers with 15 points in the victory, including 7-8 from the free throw line. Junior Griffin Johnson averages a team-best 10 points and seven rebounds a game.

The Washington girls are 0-3 after losses to First Flight, J.H. Rose and E. Carteret. Senior Haley Whitley and 16 points, seven rebounds and four steals against E. Carteret, while junior Triniti Burke had eight points and seven rebounds. Whitley leads the Pack with 11 points and eight rebounds a game.