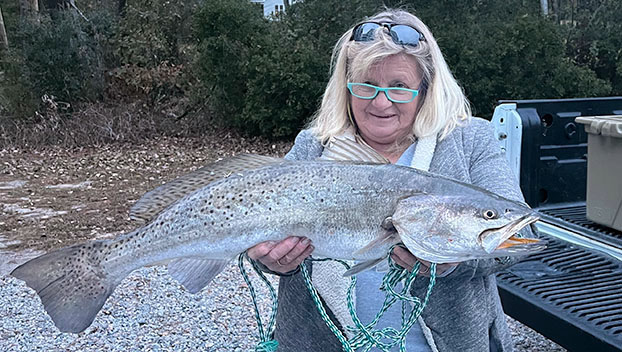 Cathy Jones holds an 11-pound speckled trout she caught at the end of her dock on Pungo Creek. Once certified, the fish is expected to land her in the International Game Fish Association record books. (Submitted photo / Cathy Jones)

Cathy Jones knew the fish on the end of her line was different than most of the speckled trout she catches from her family dock on Pungo Creek.

It had breeched during the 15-minute fight, giving her an idea of its massive size in a back-and-forth battle to land the giant fish.

But when she dropped her net in the water on that frigid day, Jones wasn’t sure she’d ever get her hands on the trophy fish.

Tired and shaking, Jones laid down on the dock and grabbed the fish by the gill plate.

“I got it up on the dock and said you’re caught.”

Jones, a Belhaven resident and owner of Pungo Creek Marine Upholstery, texted her husband to help her carry the fish back up the 450-foot dock.

Because it was a Sunday, they put the fish on ice so it could be certified the next morning at East Side Bait and Tackle in Washington.

Once certified by the IGFA, Jones’ fish will make her the women’s world-record holder for speckled trout landed on 20-pound line. That record was last set with a 10-pound, 9-ounce fish caught in Banana River, Florida in 1979.

Jones used a conventional tackle set up, including an Ugly Stick rod, Daiwa reel and 20-pound monofilament line. She caught the record-breaker on a live menhaden, fished under a cork.

“I heard something over to the right, looked back left and my cork was going under,” Jones said.

A customer at East Side Bait & Tackle suggested Jones take the fish to the Division of Marine Fisheries office at the Washington Square Mall, where an agent took the fish’s ear bone as part of a state research program. She said the agent estimated the fish’s age at 4-5 years old.

Jones said she usually releases any fish her family doesn’t plan to eat later that night.

“In this case, I couldn’t throw it back because I had to get it weighed,” she said. “And it made five meals.”

Jones said, once word got out, she noticed a burst of fisherman on Pungo Creek, many looking to congratulate her on the big catch.

“It’s exciting. It was a lot of fun” Jones said. “I am next going for the women’s world record trout on a fly rod.”

Colby Griffin, the East Side Bait & Tackle employee who weighed Jones’ fish, said the store has been seeing some good local trout catches,.

The store is holding a speckled trout tournament through Dec. 17 (Jones’ fish doesn’t qualify because she wasn’t registered in advance).

Hot baits, according to East Side Bait and Tackle, include Mirrolure’s “Sexy Trout” and the Slam Shady, Shrimp and Space Guppy, all from Z-man.

Recreational size and bag limits for speckled trout in North Carolina are 14 inches in length and four fish per day. Those regulations are the same for speckled trout caught in coastal and inland waters. For more information, visit deq.nc.gov.