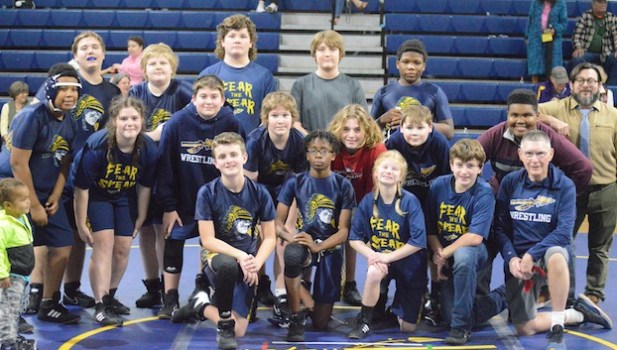 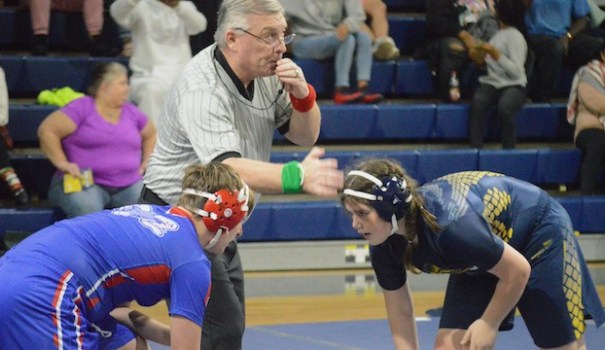 The Chocowinity Middle School gym was buzzing with anticipation. The Indians and their opponents from Greene Central Middle School had completed their warmups and the coaches had given their last minute instructions. The teams sat attentively across the mat from each other as veteran referee Ed Preston strobe to the center circle.

Preston confirmed that the scorer’s table was ready, glanced behind to the crowd, gave a quick nod to each team and proceeded to bellow a drawn out “Let’s get ready to rumble!” reminiscent of WWE announcer Michael Buffer from the 1990’s.

The crowd, taken aback by the unexpected intro, let out a huge roar and with that, the first wrestling match in CMS history was underway.

Head coach and 8th grade Science teacher Russ Chesson came to CMS from P.S. Jones in Washington this fall with the intention of starting a wrestling program.

Chesson, a three-time state champion wrestler for Washington High School in the 90’s had been a Pam Pack assistant before going to P.S. Jones.

“This is a huge opportunity for these kids to develop their mind, body and spirit,” Chesson said. “They needs an outlet for their energy and not everybody can be a power forward on the basketball team. It helps them be more focused in the classroom and gives them something to look forward to after the school day is over. They’ve made tremendous progress in a month.”

Chesson has 19 sixth, seventh and eighth-graders in the program, including two girls. Eighth-grader Victoria Hombrig won her first and only match in the 83 lb. class in the Indians opening meet, but hasn’t had an opponent in the two following matches.

Seventh-grader Allie Brabble made her debut Wednesday and battled her Greene Central opponent until late in the second period before getting pinned.

“My brothers and cousins wrestled and I’ve always roughhoused with them, so this isn’t much different,” Brabble said. “I do get some weird looks from people when I tell them I wrestle, but my teammates are fine with it. They treat me and Vicki the same as anybody else. It’s a lot of fun and it was really cool having everyone cheer for us today.”

The Indians, whose warmup jersey’s read “Fear the Spear” across the front, won two of the eight contested matches.

Coy Deel pinned his opponent in the 145 lb. division in 10 seconds, while 240 lb. Chase Vance collected a pin early in the first period.

Deel, a recent transplant from Texas, is the Indians only experienced wrestler, which makes Chesson’s job even more difficult.

“Coy was the only one who had ever been on a mat a month ago,” Chesson said. “He’s been a big help getting his teammates going. We started with the most basic fundamentals and now we are three matches in to our season. All of them are excited about learning to wrestle and they’ve come a long way in a short time.”