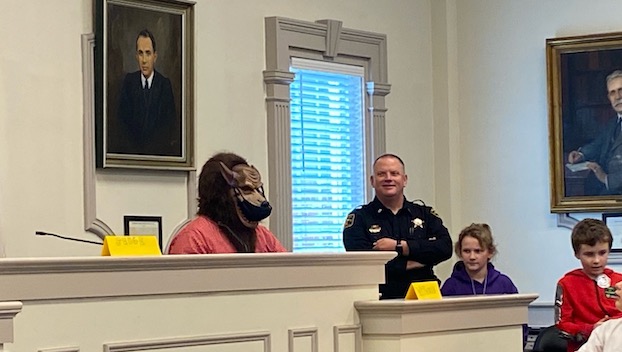 The Big Bad Wolf was tried in Beaufort County Superior Court on Wednesday December 5.  The trial is part of a field trip for the third graders from Chocowinity Primary School.

Participants in the trial included volunteers from the legal community that partnered up to provide an educational experience.  Testimony was heard from the three little pigs and Mr. B. B. Wolf who insisted that his “Big Bad days were over and that he was now known as “Wheezy Wolf”.  His defense included testimony that he had recently recovered from COVID-19 and that he was too tired and old to cause any harm.

Two of the Pigs testified to the destruction he caused to their homes.  “He huffed and puffed and blew my house down”, stated Ms. Barbie Q. Sandwich and Ms. Pork-A Hontas.

At one point the Wolf admitted that he did occasionally enjoy a sausage pizza, at which point the District Attorney asked if he knew where sausage came from.  Mr. Wolf stated that he was talking about “turkey” sausage.  In the end the jury was not convinced and found him guilty of destroying the houses.

The Judge sentenced Mr. Wolf to two years in prison and ordered that he rebuild the houses with bricks.