Pack competes in Beast of the East 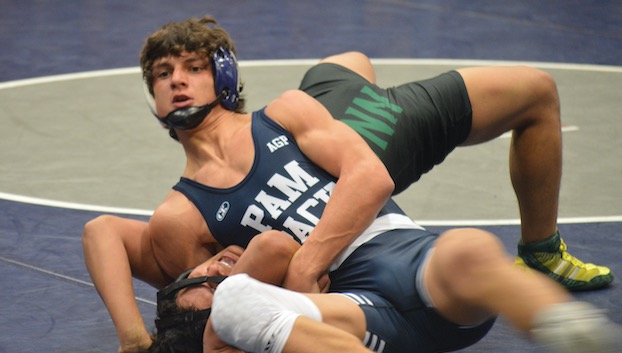 Junior Bryant Smith was the runner-up in the 160 pound class to lead the Pack contingent at Saturday’s Beast of the East wrestling tournament at Croatan High School.

The hosts won the 19-team event that featured schools from around the East in all four classifications. Swansboro finished second while Washington finished eighth.

‘Us and West Craven were the only 2A schools there, so I thought we competed very well against bigger schools for the most part,” coach Chris Penhollow said. “This tournament and the one this weekend are our two toughest of the season and both will prepare our guys for the state tournament. We had five guys finish in the top six of their weight class, which is better than we did last year.”

Smith, who is now 16-2 on the season, defeated opponents from Havelock and New Bern to reach the title match, but was pinned by his Dixon opponent.

TraQuan Haywood finished third in the 170 lb. class with pins over Havelock, Richlands, Currituck and Chapel Hill opponents before claiming the semi-final match win with a pin over Croatan. Hayward had to advance through the consolation round after losing to Dixon in the quarterfinals.

David B. Messa was fourth at 138 with wins over First Flight and Currituck before losing to West Carteret in the third place match.

Sophomore Gabe Davis also took fourth at 195 pounds. He defeated West Carteret, lost to First Flight in the semi-finals, then battled back with a win over Jacksonville before dropping the third place match to Croatan.

Christian Price was sixth in the 113 pound class to complete Washington’s top finishes.

The Pack travels to Knightdale for the WRAL Wrestling Invitational Friday and Saturday. WHS is one of 54 teams from North and South Carolina, Virginia and West Virginia.

“It’s the first time we’ve been it in four years because of COVID,” Penhollow said. “It’s a state tournament type atmosphere and a big deal for our guys. It will be fun to see how we stack up against unfamiliar opponents.”