Raiders basketball teams off to a hot start 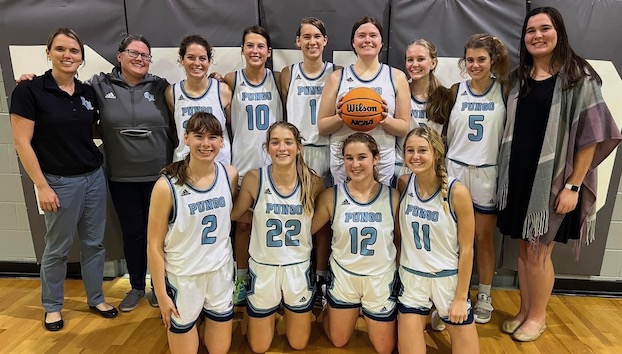 Pungo Christian Academy’s varsity basketball teams are a combined 18 – 2 to start the year.

Pungo picked up a pair of home victories over 2A Faith Christian School. The girls continued to roll, 40 – 17, as Reagan Stoop led the way with 20 points and 11 rebounds. Ashley Williford and Alden Taylor combined for 12 points and nine rebounds to help the Lady Raiders stay unbeaten.

The boys game featured a fast pace that helped both teams score 151 points, with the Raiders pulling away with an 80 – 71 victory. Maddox Lee was all over the stat sheet with 26 points, 10 steals, eight assists and six rebounds. Quay Artis and Austin Garrish had 22 points each to help the Raiders end a two-game losing streak. PCA made 24 of 27 free throws to seal the victory.

Thursday PCA hosted Kerr Vance Academy of Henderson. Reagan Stoop had a career-high 37 points that put her over 1,000 for her storied career. Stoop hit her second 3-pointer of the night with 20 seconds left to reach the milestone and the crowd erupted in cheers to celebrate her accomplishment. She is the ninth girls player in school history to reach 1,000 points with Lauren Kellie Ricks being the last to do so in 2021. Abbey Cutler set a single game assist record with 12 on the night as the Lady Raiders prevailed, 58-32.

The boys jumped out to a fast start and routed the Spartans, 69-29. Maddox Lee led the Raiders once again with 18 points. Drew Van Staalduinen (12) and Artis (10) also reached double figures as all nine Raiders scored as the boys remained unbeaten at home.

Friday the boys coasted to a 62-38 win over Mattamuskeet. Lee scored 17 points, while Garrish (14) and Van Staalduinen (12) also made double figures. Quay Artis sparked the defense with 6 steals on the night.

The girls returned to action Monday against 2A Rocky Mount Academy at home on Monday night. It was their toughest competition of the year in a 55-49 overtime win. The Lady Raiders jumped out to a 12 – 2 lead but the Eagles answered with a 21 point 2nd quarter to lead by four at halftime. Starting guards Abbey Cutler and Ginny Pugh fouled out in the fourth quarter. That left 14-year old sophomore Julia Rouse to handle the point guard duties. She hit a go ahead jumper with 15 seconds to play, but the Raiders were called for a foul as time expired sending the Eagles to the free throw line with a chance to win. They made one of two, which sent the game into overtime.

Alden Taylor took over the extra session and finished with a career-high 17 points. Stoop scored 23 and grabbed 22 rebounds, which is the second-most in a single game in program history.

The boys took a 21-11 first quarter lead and won their fourth straight, 76-66. game, Maddox Lee, Artis and Garrish led five players in double figures with 16 points Davis Lee had 14 and Van Staalduinen added 12 and had 13 rebounds. Garrish had 10 rebounds and seven steals.

The Raiders played at Community Christian Tuesday and host Ocracoke School on Thursday to finish up the 2022 portion of their schedule.