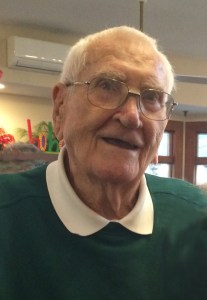 Ed was born in Pinetown and lived there until he was age 4.  He then relocated with his family to Greenville, after the death of his father.  He attended Greenville City Schools until the eighth grade before having to go to work.  He was employed at Watson Electric Company, and was then hired as an electrical supervisor at Beaufort County Hospital where he worked until his retirement.  After retiring, he continued to work as an electrician until he was 95.  He was the life of every party.  There was only one Edward Lee Smith.

Ed was a member of St. Clair’s Church of Christ in Bath; as well as a member of the Moose Lodge of Greenville.  Although Ed and his wife Faye had no children of their own, all of their nieces and nephews considered them their other parents.

He was preceded in death by his wife of 75 years, Faye Walters Smith; his parents Benjamin and Sophia Moreslender Smith; as well as three brothers and three sisters.  He is survived by several nieces and nephews.