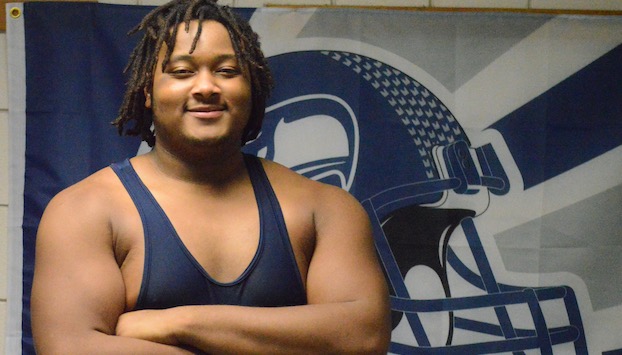 One position or event isn’t enough for Southside senior Elyjaih Baldwin. He started on the offensive and defensive line during football season, wrestles and plays basketball this winter and will throw the shot put and discus in the spring. The Greenville native and Chocowinity resident hopes his career doesn’t end after high school.

Elyjaih: I started playing basketball in fifth grade. I was too big for rec football, so I had to wait until Chocowinity Middle School to start playing. Wrestling and track started when I got to Southside. Coach John Lampkins encouraged me to play basketball when I was younger and I liked it. I’m always been agile for my size, so it’s been fun to play.

Elyjaih: I think is really cool to be part of something new. We’re proud to help start something that should be around for a long time. I can in not knowing any moves and now I’m helping our younger guys learn some. I like it because it’s different and wrestling has taught me to push myself. You work different muscles and I’ve learned to push through and not give up. It’s also fun to learn something new every day.

Elyjaih: There’s no doubt. Beating Northside to win the Anchor Bowl was definitely the highlight. We fought hard and it was a close game on their field. Some of my friends over there have been talking to me for three years about them always winning it, so it feels great to know our senior class can leave here after we won it.

Elyjaih: Coach Carrow is the head football coach and also coaches the throwers in track, so he encouraged me to try it as a freshman. I’m not a big fan of the shot, but I really like the discus. It feels really good spinning off your fingers and it’s neat to see it fly through the air, helpfully for a long way.  I qualified for regionals last year, but couldn’t compete, so I want to do that this year. It would also be cool to qualify for the state meet.

Elyjaih: I have three uncles, Ernest, George and Peanut (that’s what we called him), who passed away before I got to know them well. I would like to ask them for advice on life and learn more about their lives. We would serve seafood boil with crabs and sausage and have a great conversation.

Bonus Question: What are your plans after graduation?

Elyjaih: I really want to play college football at some level. Coach Carrow helped me send film to lots of schools and hopefully something will work out.