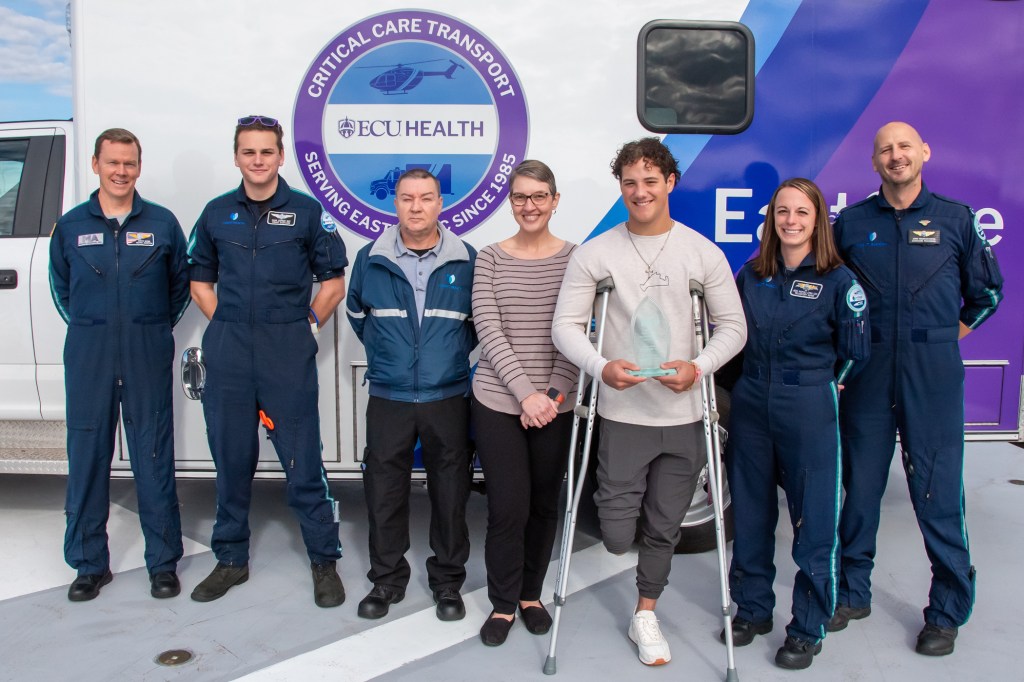 On July 23, 2022, Byrd, an incoming freshman and baseball player at ECU, was boating in a remote Beaufort County creek when his legs were cut by the propeller, resulting in severe trauma. A friend and teammate was able to pull him back in the boat and immediately applied a makeshift tourniquet. First responders on the scene recognized the severity of his injuries and requested air medical transport. The EastCare air medical team jumped into action, rendering life-saving trauma care on the flight to ECU Health Medical Center, the only Level 1 Trauma Center east of Raleigh.

“EastCare team members dedicate themselves to ensuring the people of eastern North Carolina who live in vast, rural areas have access to timely and life-saving care,” said Trey Labreque, director of EastCare. “Thanks to the quick actions of everyone involved, including Beaufort County EMS for their initial response and clear communications with the flight crew, the transition of care was quick and efficient, and the patient made it to the trauma center stabilized, which is our objective as a flight team. This award is testament to all EastCare team members who live the ECU Health mission.”

“The EastCare team has been nothing but phenomenal to me,” said Byrd. “From day one, they were doing their job to the best of their ability. I want to thank each and every person on the EastCare team for what they have done for me.”

Byrd was discharged in mid-August, nearly one month after his injury. After 22 surgeries and a partial leg amputation, Byrd continues to undergo outpatient care and rehabilitation in his recovery process. Byrd plans to continue classes at ECU and practice with the baseball team while he undergoes rehabilitation.

ECU Health is a mission-driven, 1708-bed academic health care system serving more than 1.4 million people in 29 eastern North Carolina counties. The not-for-profit system is comprised of 13,000 team members, nine hospitals and a physician group that encompasses over 1,100 academic and community providers practicing in over 180 primary and specialty clinics located in more than 130 locations. The flagship ECU Health Medical Center, a Level I Trauma Center, and ECU Health Maynard Children’s Hospital serve as the primary teaching hospitals for the Brody School of Medicine at East Carolina University. ECU Health and the Brody School of Medicine share a combined academic mission to improve the health and well-being of eastern North Carolina through patient care, education and research. For more information, visit ECUHealth.org