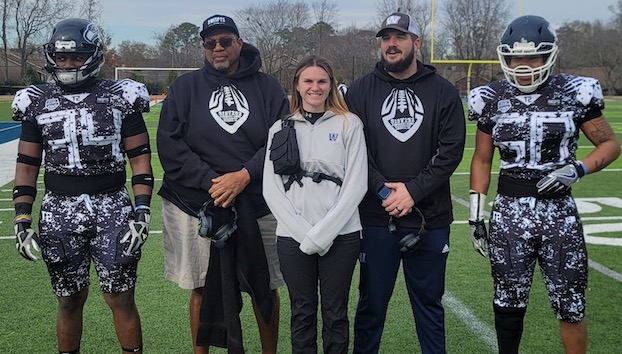 Southside’s Xavier Ham and Washington’s Myles Jackson walked off winners in their last high school game Saturday afternoon in Greenville. Even though the Seahawks and Pam Pack’s season ended last month, the two were chosen for the second 252-919 All-Star game at John Paul II High School, pitting the best seniors from the 252 area code against those from the 919.

“It was really fun to come back for the win,” Pam Pack lineman Myles Jackson said. “The 919 guys had been talking junk all week about how they were going to beat us again, so it was very satisfying to win.”

Jackson, who started his Pam Pack career at center, started at offensive tackle and played the entire contest.

Ham, who played on the Seahawks offensive and defensive line, was on the defensive side of the ball Saturday.

The players practiced twice a day Thursday and Friday after they reported and were involved in several off the field activities including handing out toys and food to local children. They stayed in a local hotel and had a roommate from a different area.

“It gave me a taste of what I think the college experience will be like,” Jackson said. “We were up early, had breakfast and had a full day.”

Like Jackson, Ham aspires to keep playing and thinks the All-Star game will help his resume.

“it hopefully will help me stand out to the coaches a little more and it meant a lot to be chosen to play,” he said. “Our defense played great in the second half, which gave the offense the chance to come back and win. I think our whole team had fun.”