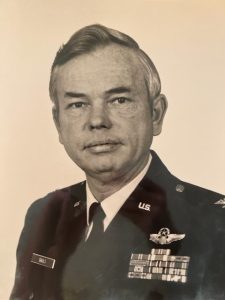 The funeral service will be conducted Wednesday at 1:30 PM in the Wilkerson Funeral Chapel. The family will receive friends prior to the service from 12:15–1:15 PM at the funeral home.

George, born and raised in Greene County, attended the area schools until 9th grade. In the mid-1940’s George moved to Lenoir County, and then in 1948 he relocated to Grifton and graduated from Contentnea High School. George graduated East Carolina University in 1954; and received a Master’s Degree from Auburn University in 1972.

He entered the U.S. Air Force in 1954 where he served for 26½ years in various assignments around the world as a pilot, and in staffing and command positions. He retired from the Air Force in 1980, and was then employed by Pratt and Whitney Aircraft until 1996 when he and his wife Kathryn moved to Greenville. George was a member of St. James United Methodist Church and their Senior Men’s Sunday School class. He was also a member of the Greenville Kiwanis Club.

George was preceded in death by his wife of 61 years Kathryn McLawhorn Sauls.

He is survived by daughter Vicki Sauls of Greenville; son Jeffrey Sauls and wife Ann of Washington; granddaughters Taylor Johnson and husband Kevin of Garner; and Brynn Sauls and fiance Spencer Warren both of Raleigh; great-grandson Henry Cooper Johnson of Garner; and brother-in-law and sister-in-law, James and Hilda McLawhorn of Grifton.